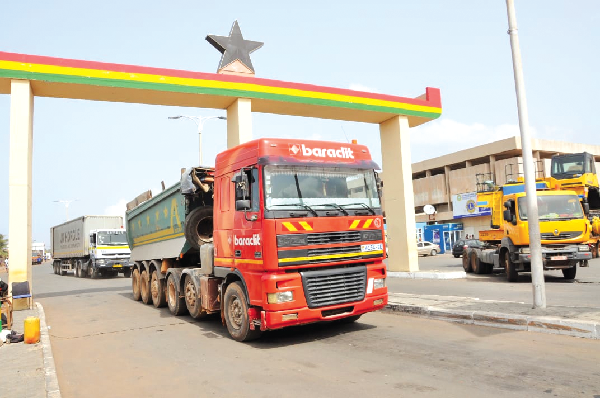 Togo opened its side of the border with Ghana at midnight yesterday. This comes more than 50 days after Ghana had reopened its land borders.

The Daily Graphic visited some of the border towns, including Aflao, Akanu and Kpoglu-Segbe Border, to ascertain how business was picking up in those places.

When the Daily Graphic arrived at the border post at Aflao about 8:30 a.m. yesterday, the metal gates which had been closed between the two countries for two years following the outbreak of the COVID-19 pandemic were open.

The Member of Parliament for Ketu South, Abla Dzifa Gomashie, was among those who turned up early at the border post to see things at first-hand.

The Kpoglu-Segbe border post was equally quiet when the Daily Graphic visited.

Although the border had been opened, both sides of the frontier remained desolate, with little human movement and commercial activities across the border.

“Today is the first day and some people in Lome and Aflao have not yet heard about the reopening,” a senior Togolese Immigration officer who requested anonymity said.

On the Ghana side, the Aflao Sector Commander of the Ghana Immigration Service (GIS), Assistant Commissioner of Immigration (ACI) Frederick Duodu, said the human and vehicular traffic across the border would definitely increase in subsequent days.

He gave an assurance that personnel of the Aflao Sector GIS were ready for any upsurge in the number of travellers across the border.

So far, ACI Duodu said, although people had been eager for Togo to open its side of the border, no untoward incident had occurred along the border.

The Daily Graphic gathered that some heavy-duty vehicles were using the ECOWAS Border Post at Akanu, near Dzodze, some 50 kilometres from Aflao, and that had largely contributed to the low volume of traffic at the Aflao Border Post.

Later in the day, a few hawkers turned up at the border post, in the hope of doing brisk business.

As of 1:30 p.m., 65 Ghanaians and 16 nationals of other ECOWAS countries had entered Lome from Aflao, while about a 100 people had left Lome for Aflao.

At the Kpoglu-Segbe Border Post, nine Ghanaians had crossed into Togo, while four Togolese had crossed from Togo into Ghana as of 11:06 a.m.

Most of the Ghanaians crossing used their Ghana Cards or passports to cross the border smoothly.

Interacting with the Daily Graphic, Ms Gomashie expressed gratitude to the leaders of the two countries for listening to the cries of their people.

“In Ketu South, we hope this will restore our livelihood, which is cross-border commerce,” the National Democratic Congress (NDC) MP said.

Ms Gomashie entreated people crossing the border to hold valid identities and proof of vaccination against COVID-19 and also be law-abiding all the time.