Time for Africa to look within for revenue — Civil society advocates 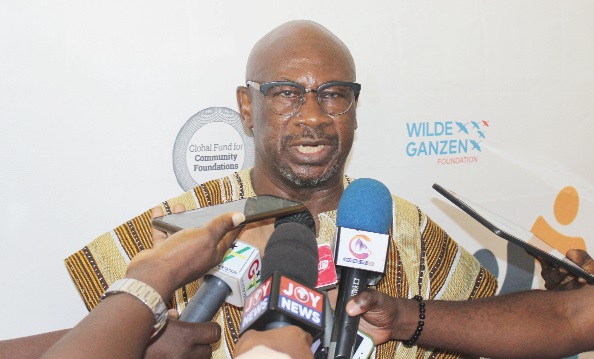 Two civil society organisations (CSOs) have called on African countries to mobilise revenues from within to finance development in the face of global economic challenges.

The West Africa Civil Society Institute (WACSI) and STAR Ghana Foundation (SGF) unanimously observed that due to the dwindling donor funding and the ravages of COVID-19, it had become imperative for countries on the continent to whip up their citizens’ interest in what they described as “community philanthropism”.

That, the two organisations explained, was local people helping one another by sharing resources for their common good and supporting the development of local communities on the continent.

The Head of Knowledge Management and Communication Unit of WASCI, Jimm Chick, and the Executive Director of STAR Ghana Foundation, Alhaji Ibrahim-Tanko Amidu, made the call in separate interviews with the media in Accra yesterday.

It was on the sidelines of a week-long First Learning and Reflection Partner Meeting under the Giving for Change (GfC) project.

The meeting was jointly organised by WASCI and STAR Ghana and aimed at bringing together global GfC partner representatives to learn, share ideas, strengthen relationships and reflect on the progress of the GfC implementation over the past 18 months.

The GfC is a five-year project which seeks to strengthen civic space and civil societies through domestic resource mobilisation, philanthropy and community giving for social change and development.

It is being funded by the Ministry of Foreign Affairs of The Netherlands and implemented in eight countries. They are Ghana, Nigeria, Uganda and Burkina Faso.

The rest are Ethiopia, Kenya, Mozambique and Palestine.

Mr Chick explained that there were a lot of resources on the continent that could be harnessed for the rapid development of communities. They included financial, technical and material.

“We have many of the rich and affluent people, including poor people on the continent, not leaving out you and I who can donate GH¢1 towards a specific development agenda can make a significant difference in our respective communities," he stated.

He said combining the financial, technical and material resources would ultimately help address the numerous challenges confronting communities on the continent which included food shortage, poverty, disease and nutritional challenges.

Mr Chick expressed optimism that when people were encouraged to see the need to mobilise local resources effectively, it would lead to “building an industry of local philanthropists that will really support Africa to move its development faster than we are currently experiencing”.

“That is the reason why we are building this strong force or movement in Africa; dependence on donor funding and aid comes with certain restrictive and obligatory measures that may not really favour our countries and organisations," he cautioned.

Alhaji Amidu said governments in Africa could also support the process by creating an enabling environment for people and communities to support development.

He noted that the governments could do that by releasing a certain percentage of public funds to encourage communities that were able to fund and own about 60 per cent of the projects they were embarking on, especially those that supported poverty alleviation.

Equally important, Alhaji Amidu said, was for the government to provide some seed money to support local initiatives.

“Philanthropism is part of our culture, just that with time it is gradually waning. In Ghana, people have the impression that if you show that you are rich you will be targeted or people from your community will come after you," he stated.

The Executive Director of Global Fund for Community Foundation, Jenny Hodgson, said the Dutch Ministry of Foreign Affairs was spending €25 million towards the implementation of the GfC project in the eight beneficiary countries.

“The people of Africa and beyond have always contributed towards funerals, burials or weddings and so the systems exist already, but so far they have been ignored and overlooked by the system of international development which is premised on money coming from outside the continent," she sated.

The Programme Director of Wilde Ganzen Foundation, a Dutch non-governmental organisation, Esther Meester, for her part, stated that for the past two decades the foundation had been looking at how best to support organisations that were driving change in their “own context”.