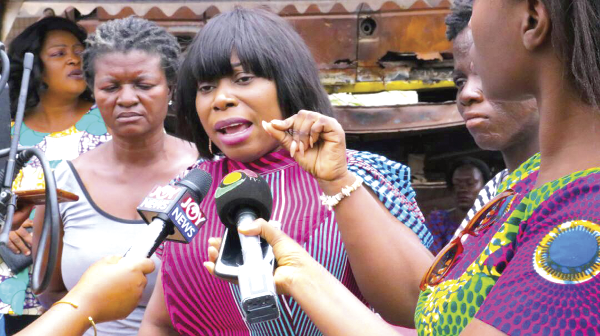 Over 100 survivors of the June 3, 2015 fire disaster have threatened to sue the Ghana Oil Company Limited (GOIL) and government for failing to compensate them.

The victims want Goil and the government to meet them as soon as possible to work out a compensation package for them.

The counsel for the victims, Ms Mary Ohenewaa Afful, told the Daily Graphic that three years after the disaster, the victims were yet to be compensated.

“We are, therefore, appealing to the directors of GOIL and the government of Ghana to meet with the victims to agree on a reasonable amount of compensation for each victim for both the survivors and the family members of the deceased victims.

“Failure to arrange a meeting shall leave us with no option but to resort to the law courts to claim huge sums of damages,’’ she said.

On June 3, 2015, floods in Accra that followed torrential rains and a fire outbreak that occurred at the Goil Filling Station at the Kwame Nkrumah Circle resulted in the death of 152 people.

Houses and property running into billions of Ghana cedis were also destroyed.

The fire outbreak led to widespread criticisms of the country’s emergency response system, while the nation mourned the dead for three days.

Scores of philanthropists and civil society groups donated various sums of money to assist the survivors and relatives of the victims.

The then President, John Dramani Mahama, also announced a GH¢60 million package to assist the victims.

“The only money confirmed to have been received by the victims were money donated by Dr Osei Kwame Despite (the CEO of Despite Group of Companies) and Kennedy Agyapong (MP for Assin Central),’’ she said.

A committee set up to investigate the fire incident reached the conclusion that the fire was caused by someone who lighted a cigarette at the filling station.

But Ms Afful said Goil must be held liable because there was a leakage at the filling station, which teamed up with the cigarette to cause the havoc.

“The Goil filling station was at fault for not finding a way to seal those leakages to clear the void of flammable substances mixing up with water to cause the fire disaster,” she said.

According to her, state agencies such as the Environmental Protection Agency (EPA) and the Accra Metropolitan Assembly (AMA) must also be held responsible.

In view of that, she said Goil and the government had a duty to compensate the victims and survivors of the disaster.