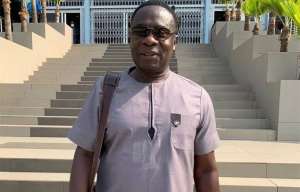 The Supreme Court will on April 13 decide whether or not to order the NDC Member of Parliament for Assin North, James Gyakye Quayson, from holding himself as a legislator until a suit challenging him is decided.

A resident of Assin Breku, Michael Ankomah-Nimfah, who secured a judgment from the Cape Coast High Court nullifying Mr Quayson’s election on the basis that he held a Canadian citizenship, wants an injunction from the Supreme Court, restraining him from holding himself out as an MP.

A seven-member panel of the highest court of the land on Tuesday fixed a date for ruling on the injunction after hearing arguments from lawyer for Mr Quayson - Mr Tsatsu Tsikata, lawyer for Mr Ankomah -Nimfah - Frank Davies, lawyer for the Electoral Commission - Emmanuel Addai and the Attorney-General (A-G) - Godfred Yeboah Dame.

Mr Davies argued that Mr Quayson was defiling the 1992 Constitution by still parading himself as an MP when the High Court had ruled that he was unqualified as at the time he contested the Assin North seat.

Mr Tsikata made a submission that the application for injunction was against the rules of the Supreme Court and decided cases.

According to him, the process for injunction were not part of the rules of the Supreme Court but the High Court rules.

In view of that, he said the applicant should had sought permission from the court before using the High Court rules.

The A-G supported the injunction application and argued that the Supreme Court had held in many cases that it had the jurisdiction to grant injunctions in constitutional cases.

On December 30, 2020, a resident of Assin North, Mr Ankomah-Nimfah, filed a parliamentary election petition at the Cape Coast High Court challenging the eligibility of Mr Quayson to be an MP.

On July 28, 2021 following that petition by Mr Ankomah-Nimfah, the Cape Coast High Court declared Mr Quayson’s election as void, on the basis that he owed allegiance to another country other than Ghana, contrary to Article 94(2) of the 1992 Constitution.

Mr Quayson filed an appeal at the Court of Appeal challenging the judgment of the Cape Coast High Court.

The appeal was last two weeks struck out by the Court of Appeal.