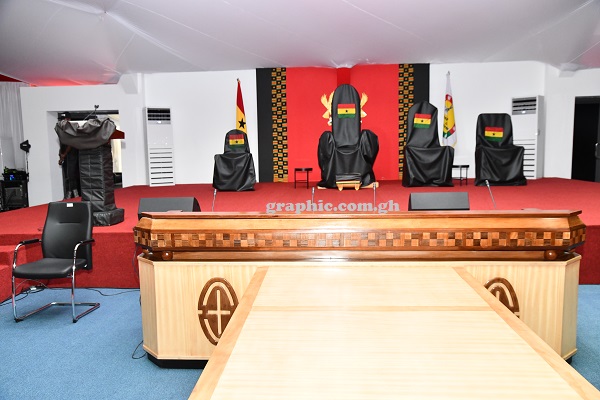 The stage is set for the swearing-in today of the President-elect, Nana Addo Dankwa Akufo-Addo, and the Vice-President-elect, Dr Mahamudu Bawumia, on the precincts of Parliament House.

The duo are entering their second term in office, after President Akufo-Addo’s victory in the December 7, 2020, presidential election.

Officially, the first term of President Akufo-Addo and Vice-President Bawumia came to an end last midnight, the same period that the seventh Parliament was dissolved to pave the way for the inauguration of the eighth Parliament in the early hours of today.

The swearing-in ceremony is expected to commence at 11 a.m., and invited guests, apart from the Heads of State, are expected to be seated by 9.45 a.m.

It will be the second time in the Fourth Republic that a President-elect will be sworn in on the precincts of Parliament. The first was President John Agyekum Kufuor in 2001.

All the other Presidents were sworn in at the Black Star Square.

A host of dignitaries, including 12 Heads of State and representatives of governments, are participating in the event.

Also confirming their presence were representatives from Nigeria and The Gambia.

The rest of the dignitaries are the Foreign ministers of India, France, Rwanda, the UK Minister for Africa; the US Special Envoy for the Sahel Region, Ambassador J. Peter Pham; the President of ECOWAS, the Chairperson of the AU Commission and representatives from the UK Conservative Party.

The swearing-in of the President and the Vice-President is purely a parliamentary activity, and in line with that, a new facility, where the event will take place, has been mounted at the forecourt of the Parliament House to cater for invited guests, among other personalities.

An elaborate security operations plan has been developed by the security agencies, working in tandem with the inauguration committee, to ensure that security is maintained before, during and after the ceremony.

In line with that, all roads leading to Parliament House will be closed to the public.

The roads to be closed are the Osu Cemetery road on the Lokko Street, the Castle Road from the AU Circle to the Osu Cemetery Traffic Light, the Crossroad heading towards the Starlet 95 Street, the Independence Arch, near the Ohene Djan Sports Stadium, the Gamel Abdel Nasser Avenue passing in front of the Ghana Institute of Journalism (GIJ) on the Haile Selassie Street and the Opeibea-37 Military Hospital road and the Ako Adjei Interchange on the Liberation Road.

Six thousand security personnel drawn from the police, the military and allied agencies will provide security to ensure the protection of lives and properties and general maintenance of law and order.

In addition to providing security, the police will support protocol duties of the State Protocol Department. They will perform functions such as the bearing of the State Sword, escort (by the Police Mounted Squadron), motorcade as well as a performance by the Police Band.

Motorists from the Lokko Street are expected to use the 28th February Road through the John Evans Atta Mills Street to the Central Business District (CBD) of Accra or pass through the Oxford Street through the Danquah Circle to Ring Road Central en route to the Kwame Nkrumah Circle and thence to their destinations.

Traffic from the AU Roundabout towards the Castle Road through the Osu Cemetery will be onto the Independence Avenue through the El Sinousi Street in front of the GIJ on the Haile Selassie Street.

Traffic from the CBD/Kinbu on the Independence Avenue will be diverted on to the Barnes Road and the Liberia Road to link up to Kanda and thence to Madina.

Traffic emerging from Madina on the Liberation Road will be diverted to the Casely-Hayford Road, thence to the Obasanjo Highway and the Kanda Highway to link with the CBD.

Today is a statutory public holiday designated as Constitution Day to mark the coming into force of the 1992 Constitution.

In December 2018, a bill was laid in Parliament to amend the Public Holiday Act 2001 to provide for three different holidays — January 7, which was observed as Constitution Day first in 2019; August 4, Founders Day, and September 21, Kwame Nkrumah Memorial Day.

The first President of the Fourth Republic was Flt Lt Jerry John Rawlings of the NDC, who won two terms and was followed by Mr John Agyekum Kufuor, who also won two terms (2001-2005, 2005-2009).

Then came Prof. John Evans Atta Mills, who won the 2008 election to become President. But he died months before his term ended, which led to then Vice-President John Dramani Mahama taking over as President to complete the late Prof. Mills’s term.
Mr Mahama won the December 7, 2012, presidential election.