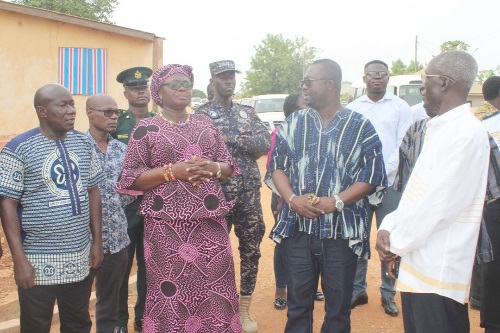 The Wenchi Traditional Council has made a passionate appeal to President Nana Addo Dankwa Akufo-Addo to revive the Wenchi Tomato Factory (Tomacan) and the Wenchi Animal Husbandry before the end of his tenure of office.

In addition, the council has also appealed to the government to provide resources and logistics for the Wenchi Farming Institute to boost its operation.

The Chief of Koase, Nana Owusu Ansah Sasraku Besseah II, made the appeal when the Bono Regional Minister, Justina Owusu-Banahene, paid a courtesy call on the council as part of her working visit to the Wenchi Municipality.

He expressed the hope that the revival of the factory and resourcing of the institute would help create jobs and improve the Wenchi Municipal Assembly’s revenue mobilisation drive and strengthen the operations of the institute.

The Wenchi Tomato Processing Factory is noted for the processing and packaging of vegetables, particularly tomatoes, garden-eggs, okra and other kinds of fruits.

The factory used to be an economic backbone of Wenchi and its adjoining communities in the 1960s.

The factory was said to have directly employed over 1,000 people at its peak, while a lot more benefited indirectly from its operation through the out-grower scheme.

However, the factory was shut down in 1987 as a result of lack of the right quantity of raw materials for its operation.

As part of her visit, the minster inspected some ongoing and completed projects at the Koase Senior High School, the Wenchi Sports Field and the seven-kilometre Wenchi town roads executed by PMC African Limited, which is expected to be completed next month.

At Koase SHS, six out of the eight facilities being undertaken had been completed and handed over to the school, while the boys’ dormitory , two-storey science block and laboratory were over 70 per cent complete.

Nana Besseah II, appealed to the minister to expedite action on the construction of the Wenchi water supply project, explaining that in 2020, President Akufo-Addo cut the sod for its construction.

Speaking during a meeting of the minister with staff of the Wenchi Municipal Assembly, the Municipal Chief Executive (MCE), Alexander Obour Damoah, said as of February, 2022, the assembly had collected an amount of GH¢231,168 as its 2022 internally generated fund (IGF).

Mr Damoah said the improvement in revenue mobilisation was as a result of the implementation of several strategies such as the inauguration of five substructures and the reactivation of revenue barriers at various exit and entry points of the municipality.

There was also collaboration with the police to ensure compliance with the payment of fees and rates and the establishment of a vibrant revenue task force for the effective and frequent monitoring of revenue activities.

Speaking during the assembly meeting, Ms Owusu-Banahene urged prioritisation of the completion of abandoned projects to reduce infrastructure deficit in the communities.

She advised the assembly to constitute a committee to oversee the completion of abandoned and ongoing projects.

Ms Owusu-Banahene promised to push for the completion of projects, particularly the Wenchi water supply project and resource the police to beef up security in the municipality.

She urged the public to embrace the e-levy in order to mobilise additional revenue to enhance development and charged the assembly to educate the public on the need to pay taxes.

Ms Owusu-Banahene said the government was not only committed to paying school fees under the Free SHS policy, but was also committed to investing in infrastructure.

She said the provision of infrastructure at the Koase SHS demonstrated the government's commitment to the Free SHS education policy.