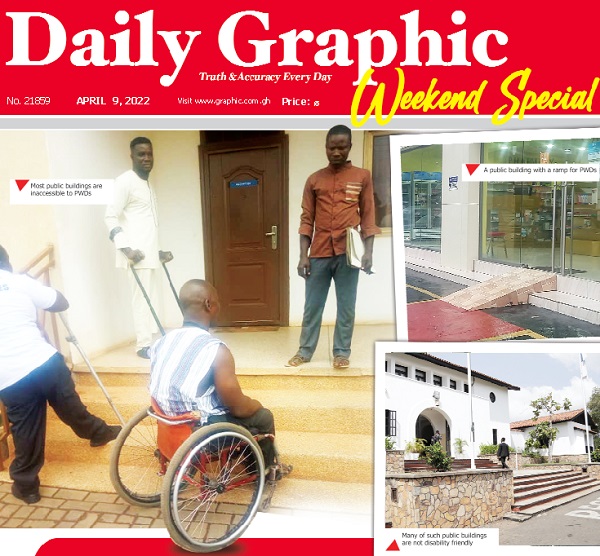 Fifteen years after the enactment of the Persons with Disability (PWD) Act, 2006 (Act 715), which seeks to end discrimination against PWDs, they continue to go through harrowing experiences in accessing public spaces and services.

Although the Act gave a 10-year moratorium for all public buildings to be made disability-friendly, the premises of many public institutions remain “no go areas” for physically challenged persons after the expiration of the moratorium on August 11, 2016.

The Daily Graphic’s observations across the country six years after the expiration of the 10-year moratorium on August 11, 2016 of compliance to the law revealed that many ministries, departments and agencies (MDAs), academic institutions, health installations, faith-based organisations and other essential service providers have failed to make their premises disability-friendly.

In the national capital, Accra, the Daily Graphic observed that key ministries such as Finance, Youth and Sports, Education, Health, which operate in storey buildings, have no ramps and other disability-friendly means of accessing their offices.

It is not all rosy for PWDs to use Parliament House, where the law was passed, as only portions of the building are disability-friendly.

Although wheelchair users can make their way into the Chamber of Parliament, it is difficult for such persons to access the press and public galleries, unless they are allowed to use the elevator from the ground floor, which is currently restricted.

Also, the Ministry of Gender, Children and Social Protection (MGCSP) that has oversight responsibility for the welfare of PWDs, does not have ramps or elevators, making the premises inaccessible to physically challenged persons.

The Daily Graphic also found that accessing the headquarters of security agencies such as the Ghana Police Service, Ghana Immigration Service (GIS), the Ghana National Fire Service (GNFS) is laborious for PWDs as there are no ramps or functional lifts to aid their movement.

The story is not different with essential service providers such as the Passport Office, the Ghana Water Company Limited (GWCL) and the Electricity Company of Ghana (ECG).

Again, all the five state media establishments and an overwhelming number of private media houses have not complied with the law as it is still difficult for PWDs to access their premises.

Across the regions, similar observations were made where public establishments remain challenging grounds for PWDs.

For instance, in the Central Region, the five-storey Cape Coast Regional ministerial enclave that houses key public institutions such as the regional office of the Ghana Education Service (GES), the Attorney-General's Department, Audit Service, the Ghana News Agency (GNA), has no elevators and, therefore, is inaccessible to PWDs.

Apart from the universities, the designs of buildings at technical universities, colleges of education and senior high schools (SHSs) make them hostile to physically challenged persons.

In the health sector, PWDs go through painful ordeals to access healthcare services at health facilities because the premises are not accessible.

The Korle Bu Teaching Hospital (KBTH), which is the country’s premier referral hospital, is not friendly to PWDs to a large extent.

Although many departments of the hospital operate from storey buildings, those structures do not have functioning elevators or ramps for physically challenged persons.

Also, the beds in some of the wards are not adjustable to make it easy for physically challenged persons, especially those in wheelchairs, to use.

At the Cape Coast Regional Hospital, for instance, the elevators are malfunctioning, making it extremely difficult for patients, particularly PWDs, to be moved up and down the stairs for medical attention.

Section Six of Act 715 states: “The owner or occupier of a place to which the public has access shall provide appropriate facilities that make the place accessible to and available for use by a person with disability.”

This puts the definition of public buildings beyond those owned by the state to any building that can be accessed by members of the public. They include those of financial institutions, supermarkets and shopping malls; hotels and restaurants, garages, churches, mosques and other places of worship.

Section Seven of the Act also states: “A person who provides service to the public shall put in place the necessary facilities that make the service available and accessible to a person with disability.”

The Act made accessibility to public building and facilities a disability rights issue and put the burden on all public institutions and managers of public facilities, to, within 10 years starting from 2006, redesign their premises to make it accessible to PWDs.

Nonetheless, a handful of MDAs such as the Ministries of Food and Agriculture, Roads and Highways as well as the National Council for Tertiary Education, have disability-friendly premises as required by law.

The seat of the Presidency, Jubilee House, which was constructed after the passage of the law, is among those new buildings that are very disability-friendly as there are level floors and lifts to take physically challenged persons to any floor of the building.

A member of the Ghana Federation of Disability (GFD) Advocacy Committee, Lillian Bruce-Lyle, expressed worry that six years after the moratorium provided for in Act 715 for public spaces to be made accessible to PWDs, the compliance level was still low.

"Even the Ministry of Gender, Children and Social Protection (MGCSP) where PWDs go to for protection is not accessible. I use a wheelchair and anytime I go there, I cannot access it," she said.

Also physically challenged persons find it difficult to access many premises of banks to transact business, especially those which operate in high-rise buildings.

Again, the Daily Graphic observed that the automated teller machines (ATMs) were not designed with PWDs in mind. The height of the ATMs is inaccessible to persons in wheelchairs.

Worst still, some of the ATMs do not have in-built speech devices to aid the visually impaired to use those facilities.

Ms Bruce-Lyle, who is also a member of the National Council of PWDs, said while the premises of banks remained largely inaccessible to physically challenged persons, the situation had been aggravated by the high platforms on which ATMs were located.

"The ATMs are a bit higher and if you do not have an aide, you will have problems using it. Also, if you struggle to enter the banking halls, the counters are a bit high so if you want to complete a form, it is practically impossible to use that platform," she said.

The National Chairman of the National Council on Persons with Disability (NCPD), Yaw Ofori Debra, described the situation as “discriminatory and unacceptable.”

“In some countries, ATMs have in-built speech devices to cater for the needs of visually impaired persons. It is about time our banks incorporated such features to serve the needs of the blind. They should also ensure that the ATMs are fixed at heights that will make it easy for those who use wheelchairs to access,” he said.

Section 23 of Act 715 states: “The Ministries responsible for rail, air and road transport and where appropriate the Ministry of Local Government shall ensure that the needs of PWDs are taken into account in the design, construction and operation of the transportation network.”

Contrary to the provisions of this Act, the country’s transport infrastructure has been poorly designed and remains inaccessible to PWDs, especially the physically challenged who use crutches and wheelchairs.

Currently, domestic airlines do not have adequate provisions for wheelchair users to board flights.

"Those of us who use wheelchairs cannot access local flights because they tell us that someone has to help us, and that the more we use the staircase to the plane, the more we weaken it," she said.

However, Terminal Three, a new edifice at the Kotoka International Airport, has aerobridges that facilitate the boarding of persons with disability.

Again, buses and other commercial vehicles have inaccessible entrances that make it difficult for persons with disability to enter the vehicles.

A physically challenged person, Anthony Adarkwah, said when they struggled to board such vehicles, they faced an even tougher hurdle of how to conveniently keep their crutches.

"The design of the vehicles we have in the system is such that those of us who use crutches cannot board them. The spaces between the seats are also too small so sometimes even if you struggle to get on board a vehicle and your crutches interfere with some passengers, they can verbally abuse you.”

Also, PWDs find that open drains and gutters in many parts of Accra and other major cities such as Kumasi, Tamale, Cape Coast and Takoradi make it extremely difficult for wheelchair users to move around.

In Accra, in particular, the situation is worst because petty traders and other road users have taken over pedestrian walkways for business.

The President of the GFD in the Central Region, Nana George Frimpong, observed that such a situation deepened the vulnerability of PWDs who had to be carried on the back of people and taken upstairs for treatment.

Aside from their inability to access the premises of health facilities, PWDs have also expressed concern about discrimination in terms of access to relevant information on medical consumables.

Mr Debra said it was discriminatory that local pharmaceutical products did not have braille embossments on the boxes for the visually impaired to read the vital information on them, including the dosage and side effects of drugs.

Touching on ways of enforcing the provisions of Act 715, Ms Bruce-Lyle said: “It is practically impossible to prosecute offenders because there is no legislative instrument (L.I) backing the Act.”

She, however, said a process had begun to review Act 715 and also pass an L.I "to give the Act the teeth to bite."

"We are working with the Ministry of Gender and the Office of the Attorney-General on reviewing Act 715 and passing the L.I. The Attorney-General has promised that the L.I and the reviewed Act will be laid in Parliament before the House rises," she added.

The GFD advocacy committee member stressed that the passage of the L.I was critical to achieving compliance to the new building code that had been provided by the Ghana Standards Authority).

She also said that the MDAs and members of the public must strictly adhere to the building code by the GSA which clearly spelt out specifications for including disability-friendly features such as ramps and elevators in buildings.