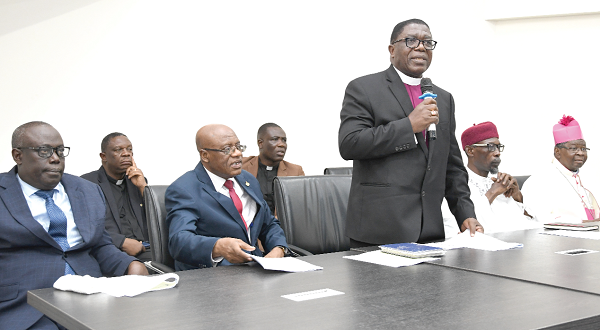 Christian and Muslim leaders have called for an immediate ban of all small-scale mining activities until a workable and satisfactory road map has been developed to ensure responsible mining in the country.

They have consequently proposed an urgent national stakeholder's dialogue under the auspices of religious leaders to discuss the sector and the challenges of illegal mining with all political parties, mining technocrats, the media, traditional authorities and other relevant groupings.

They said this was to enable them to commit to “a nonpartisan national strategy to sustainably deal with this national canker before we sink as a nation”.

The leaders made the call at a news conference in Accra yesterday to address issues on galamsey, make recommendations and halt the devastating effects of the menace on the environment and citizenry.

The leaders were from the Christian Council of Ghana, the Ghana Catholic Bishops' Conference (GCBC), the Ghana Pentecostal and Charismatic Council (GPCC), the Office of the National Chief Imam, the Council for Independent Churches, the National Association of Charismatic and Christian Churches and Para-Church Organisations.

The Archbishop of Tamale and President of the GCBC, Most Rev. Philip Naameh; spokesperson for the National Chief Imam, Sheikh Armiyawo Shaibu; the National President of Full Gospel Business Men's Fellowship, Emmanuel Baba Mahama, and the President of the GPCC, Reverend Professor Paul Frimpong-Manso, took turns to address the news conference, which followed a visit by the religious leaders to a number of affected galamsey communities in the country.


They pointed out that “religious leaders in the country were deeply concerned about the devastation that illegal mining (galamsey) had caused and continue to cause our nation”.

They also gave an ultimatum to metropolitan, municipal, and district chief executives (MMDCEs) in the country to ensure that water bodies that had been polluted because of illegal mining activities within their respective jurisdictions were cleaned by June 30, 2023.

The religious leaders further emphasised that they were ready to mobilise a legal team to go to court on the matter and remove from office MMDCEs who allowed such menace in their respective jurisdictions to continue.

They called on government to “swiftly arrest and prosecute” all those involved in galamsey activities without fear or favour to serve as deterrent to others.

The leaders equally advocated for a week of fasting and prayers to pray for change of hearts and attitudes among Ghanaians for God's mercy to come upon the nation due to some destruction caused to the environment by the citizenry.

They further directed that owing to the gravity of the matter, all religious leaders in the country were to wear red armbands to show their deep concern for the destruction of the nation’s environment through galamsey.

The leaders expressed regret that galamsey was preventing the youth from going to school, and called on all well-meaning Ghanaians to “immediately report any child of school-going age who is involved in galamsey activities in their communities to the appropriate authorities and also to their respective religious leaders”.

They further entreated chiefs and queen mothers to hold the ancestral lands in trust for their citizens.

“As custodians of our lands and cultural heritage, you are spiritually bound to protect the lands inherited from your predecessors,” they observed.

They, however, expressed regret that some traditional rulers were also responsible for allowing such “ecological destructions in their jurisdictions”.

Touching on past efforts to eradicate the menace, the leaders appreciated President Akufo-Addo’s call to end galamsey, but stated that more could and ought to be done to end the menace.

The Presiding Bishop of the Methodist Church, Ghana, Most Reverend Dr Paul Boafo, expressed sadness about what he described as “mockery” by a section of the media of some activities of religious leaders, and mentioned in particular their last fact-finding tour to some galamsey sites where they (the leaders) held some prayers.