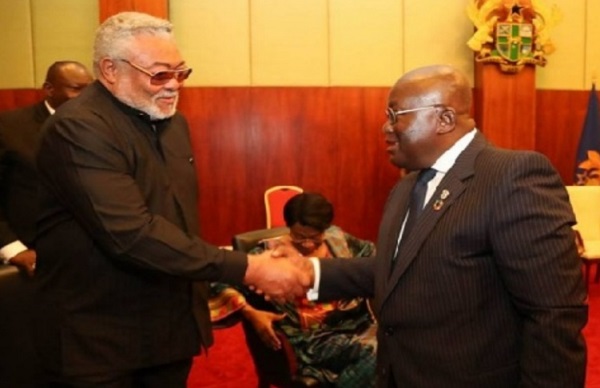 President Nana Addo Dankwa Akufo-Addo has disclosed that the family of the late former President Jerry John Rawlings has accepted his decision to rename the University of Development Studies, Tamale after him.

In a tribute read at the final day of a four-day funeral for Mr Rawlings in Accra, President Akufo-Addo said although the former military leader declined the initial offer to rename UDS after him in 2017, the offer has since found favour with his family.

He said the necessary formalities will be carried out to rename the UDS; The Jerry John Rawlings University of Development Studies, Tamale.

President Akufo-Addo said: "Whilst he was with us, he, respectfully, declined an offer I made to him, in 2017, to have the University of Development Studies, Tamale, (UDS), which he, personally, helped establish, named after him. His reason was that, in adhering to a long-standing principle, he did not want to have any national monument or facility named after him. Two days after his passing, at the 21st Congregation of UDS, I expressed my strongest convictions, in spite of his reservations, that such an honour should be accorded him. I am glad that this has found favour with his family, and the necessary formalities will be carried out to achieve this, i.e. The Jerry John Rawlings University of Development Studies, Tamale".

After saying this as part of his tribute at the funeral service in Accra Wednesday morning, former First Lady, Nana Konadu Agyeman Rawlings responded with an applause.

President Rawlings played a crucial role in the founding of UDS as he used his prize money from World Food Prize of $50,000 as seed money to set it up.

It was founded as a multi-campus institution. It is the fifth public university to be established in Ghana.