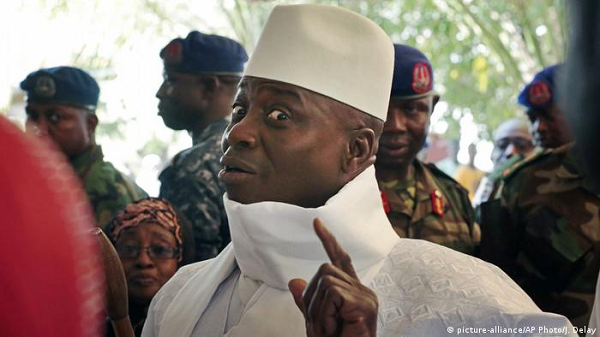 The Gambia has accepted a recommendation of its Truth, Reconciliation and Reparations Commission (TRRC), to prosecute its former leader, Yahya Jammeh and 13 others for the brutal, state sponsored extra-judicial killings of unarmed economic migrants from some ECOWAS countries in 2005.

A Government of The Gambia whitepaper on the recommendations of the TRRC, issued Wednesday, agreed that a paranoid Jammeh sanctioned the executions, aided by the 13 others it called “enablers and accomplices”.

Yahya Jammeh is currently in exile and is thought to be in Equatorial Guinea.

The 13 others named to face prosecution are;

The 178-page Whitepaper of 600 paragraphs, accepted virtually all the 265 recommendations of the TRRC, set up in December 2017 to;

b. establish and make known the fate or whereabouts of disappeared victims;

c. provide victims an opportunity to relate their own accounts of the violations and abuses suffered; and

On the specific case of the killing of the West African migrants, including a good number of Ghanaians, the Whitepaper copiously quotes the report of the TRRC, saying that on 22nd July, 2005, “over sixty-seven economic migrants (including 50 Ghanaians, 7 Nigerians, 2 Senegalese, 3 Ivoirians, and 2 Togolese) entered The Gambia hoping to get to Europe via the Atlantic Ocean and the Mediterranean Sea,” having been advised by their agents to travel to The Gambia where a boat would be on standby to transport them to Europe.

“However, upon arrival, their agent/smuggler abandoned them. Many of the migrants were subsequently detained, perceived as mercenaries, arrested, and executed by Gambian State Agents comprised of the Marine Unit, Police officers from the now defunct National Intelligence Agency (NIA), and the Junglers. The execution site was by an old well.”

“On 23 July 2005, dead bodies were discovered in a forest at the Tanji Bird Reserve towards Tanji Village. The discoveries were reported to the Police by a passer-by.

“Following local and international outcry from human rights activities/groups, and the Ghanaian Foreign Minister at the time Nana Akufo Addo's meeting with President Yahya Jammeh, and his press statement on 16 August 2005, an investigation was launched in 2005 to investigate the killings of the West African migrants. The investigation panel was headed by Malamin Cessay, a former Commissioner of the Gambian Police Force. However, the investigation was blighted with falsehoods, cover-ups, and destruction of evidence.

“Having conducted its investigation, the Commission found that the accounts provided by the witnesses relating to the arrests, enforced disappearances, and extrajudicial killings of the West African migrants in July 2005, and on Gambia soil, was consistent throughout and ought to be believed. The victims were economic migrants hoping to get to Europe via The Gambia, but were perceived as mercenaries by former President Yahya Jammeh's regime.

“The Commission found that on 21 July 2005, the West African migrants and victims, many of whom were from Ghana travelled on a boat from Mbour in Senegal and arrived near Barra in The Gambia on the morning of 22 July 2005. At least 5 or 7 migrants jumped off the boat, swam to the shore, and entered Banjul. The remaining migrants attempted to contact their agent without success. They were subsequently arrested by Police officers when they tried to find a boat that would take them to Banjul to join their connecting boat to Europe. The migrants were arrested without being informed of the reason for their arrest and taken to Barra Police Station. The migrants were transferred from Barra Police Station to the Navy Headquarters in Banjul. A large number of high-ranking officials were present at the Navy Headquarters that night, and included Biran Mbye (Police Operations Commander); Assan Sarr (former Navy Commander); Abou Njie (Deputy Inspector General of Police); Ngorr Secka; Foday Barry; Baba Saho; Saddy Gassama; as well as other senior NIA officials and Jungler Kawsu Camara (nicknamed Bombardier). Many of these officials would subsequently go on to participate in the cover-up of the massacre.

“This incident coincided with the 22 July "Revolution Day" celebrations and while attending the celebrations in Banjul with other senior officials, President Jammeh was informed about the migrants' apprehension. Yahya Jammeh, whose previous attempted coup against his regime left him paranoid, dealt with coupists brutally as a way of deterring others from launching coups against his government. With his history of paranoia, the Commission concluded that when he was informed about the migrants onshore, a sense of "fear and paranoia about a new possible coup gripped him, leading him to make a rushed decision, believing that the migrants were mercenaries or coup-plotters" - which the Commission believes "led him to give direct orders to the Junglers to summarily execute the defenceless harmless migrants."

“As attested by multiple witnesses who testified before the Commission, there was nothing in the appearances or behaviour of the migrants which suggested or might have suggested that they were something else other than migrants. The Commission asserts that, even if they were criminals or broke Gambian law in any way or form, due process should have been adhered to. Despite being economic migrants, the Commission affirms that former President Yahya Jammeh, in his fear and paranoia, backed by State Agents under his command, already made up their minds and the migrants were extrajudicially executed.

“The Commission's investigations revealed that the migrants were brutally tortured at the Navy Headquarters when additional officers and members of the Marine Unit, Police, the NIA, and Junglers arrived on site. They were later tied up with ropes, forced onto two pickup trucks and transported to a forest about two kilometres away from Yahya Jammeh's residence in Kanilai. The Junglers included Solo Bojang, Malick Jatta, and Sanna Manjang. The Commission found evidence substantiating the fact that Solo Bojang was in regular contact with President Yahya Jammeh that night, and was ordered by the President to execute the migrants.

“The Commission found that when the pickup truck transporting the migrants stopped in the forest, Martin Kyere, the only Ghanaian migrant that survived the massacre managed to escape by jumping off the back of the truck and making a run for it. The other migrants however did not survive as they were shot alternatively by the Junglers and pushed into a well. After their heinous act, they returned to Kanilai and President Jammeh was briefed by a Jungler as to what had taken place.

“The Commission found that on 23 July 2005, the bodies of eight migrants were discovered near Brufut village and the Tanji Bird Reserve and reported to the Police. Many witnesses testified that they found blood coming from the mouths, noses, and ears of the migrants when their bodies were found. Further, their skulls were fractured, and they had facial injuries consistent with hacking.

“Acting under the instructions of their Commander, two police officers from Ghana Town Police Station tried to conceal the evidence and buried two of the bodies at the Tanji Bird Reserve without investigating the identities of the victims and their cause of death. At the hearing, the Commission obtained evidence that two Ghanaian migrants escaped and sought refuge at Ghana Town near Brufut but were turned over to the Police by local leaders. The two escapees have not been heard from since.

“The brutal killing of the West African migrants caused national and international outcry, and a demand for justice and accountability for the victims. The Commission found that, not only did the State sanction the gruesome execution of victims, but it also went to great lengths to cover it up including destruction of evidence such as the police diaries of the Police Stations where the victims were taken to and detained prior to their gruesome execution.

“The Gambian authorities set up an investigation panel in 2005 however, the Commission found that the investigation panel was not interested in investigating the incident properly and bringing the killers to justice. Instead, it was a sham whose brief was to conceal evidence and refute Martin Kyere's account that the victims were massacred following his return to Ghana. In his testimony before the Commission, Malamin Cessay confessed that he presided and directly participated in that sham and deceptive investigation, as well as fabricated the panel's report that came from the investigation. Malamin Cessay admitted to the Commission that "it was all part of a collective and massive state-wide campaign aimed to cover-up and exonerate Yahya Jammeh's regime from its responsibility for these brutal killings."

“Based on the evidence received by the Commission, the Commission concluded that the national task force was created solely to hamper the ECOWAS/UN investigation by deliberately misleading them. That former President Yahya Jammeh was responsible for the extrajudicial killings, enforced disappearance, and torture of the West African economic migrants. The Commission concludes that, in July 2005, President Jammeh gave the Junglers the direct orders to summarily execute the migrants. Further, the Commission holds Yahya Jammeh responsible for the subsequent mass cover-up designed solely to exonerate him for these heinous crimes.”

The Government of The Gambia accepted the TRRC's recommendation, along with several other recommendations, and made further proposals aimed at putting the matter to rest.

Stay with Graphic Online for further reports from the Whitepaper.