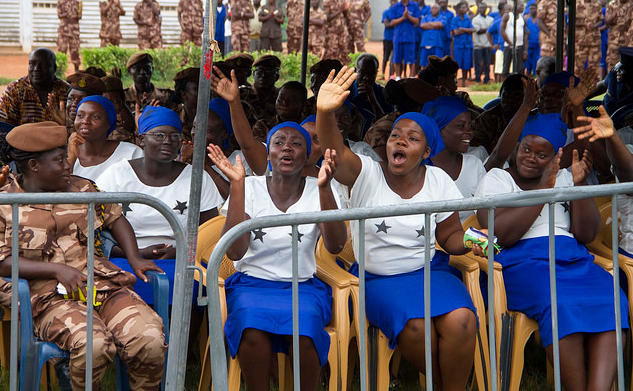 For the first time, inmates of the Nsawam Medium Prison last Wednesday voted in the December 7 General Election.

While prison officers monitored the electoral process as the electoral officers carried out their duties, the inmates took turns to take their voter identification cards, which were in the custody of the prison wardens, to cast their votes.

As at 1 p.m., 247 inmates and 11 ex-convicts, out of 366 registered voters, had cast their votes at both the female and male medium prisons.

Speaking to the Daily Graphic, the Commander of the Nsawam Prison, Deputy Director of Prisons, Mr Isaac Kofi Egyir, said the voting started at exactly 7:20 a.m.

He said there had not been any challenges and the exercise was expected to end smoothly at 5 p.m.

“All the materials and officials arrived on time for the exercise, and the election process has been going on well,” said Mr Egyir who is also the Regional Commander of the Eastern Regional Ghana Police Service.

The inmates trickled in to exercise their franchise after attending a church service in the morning and undertaking their assigned daily chores.

“We cannot get a total turnout as some of the registered voters have been released from prison custody. We were expecting them to come and cast their votes here but only a few have turned out so far,” Mr Egyir noted.

At the female prison, 25 inmates, including one ex-convict, had voted out of 37 expected voters.

The Officer in charge at the Female Prison, the Deputy Director of Prisons, Ms Charity Araba Magnusen, said some of the registered voters had been released through amnesty, while others had served their sentences and been discharged.

The Presiding Officer at the polling station of the Female Prison, Ms Christian Awutey, said the only challenge was the delay at the entry point of the prison as all the electoral officials had to go through a thorough process of screening before they could enter and set up.

The Electoral Commission (EC) registered a total of 2,276 prison inmates throughout the country to participate in the 2016 presidential and parliamentary elections.

Under Article 42 of the 1992 Constitution, the Supreme Court had in 2010 upheld the rights of prison inmates to vote in general elections in Ghana.

Professor Evans John Atta Mills, the then President, announced on November 8, 2011 during the inauguration of the Ankaful Maximum Security Prison in the Central Region that the EC would be well resourced to register prison inmates for them to cast their votes in future elections.

From Sunyani, Emmanuel Adu Gyamera, writes that 157  prisoners in the Brong Ahafo Region were registered, out of which 134 voted.

The Brong Ahafo Regional Public Relations Officer for the Ghana Prisons Service, Assistant Superintendent of Police (ASP) Vincent Ziniel told the Daily Graphic that the prisoners were registered during the registration exercise earlier in the year.