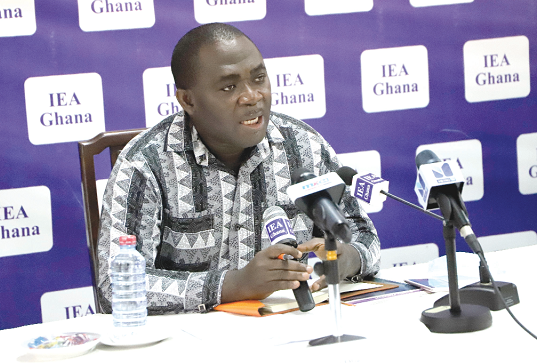 Discussants at a forum on public expectations of the second-term mandate of President Nana Addo Dankwa Akufo-Addo have urged the President to be firm in reducing corruption and indiscipline and also ensure good governance.

In separate submissions, they said corruption and bad leadership were part of the foundational challenges hindering the socio-economic development of the country.

The forum was organised by the Institute of Economic Affairs (IEA) in Accra yesterday on the topic: "What's new, Mr President? Expectations in the second term".

They also proffered ideas to help drive growth in the various sectors of the economy, including revamping agriculture, reforming education, reducing recurrent expenditure and re-examining the One-district, One-factory (1D1F) policy.

Other topics were investment in industrialisation, supporting the private sector to create jobs and re-examining the use of oil revenue.

He encouraged stakeholders to avoid “superficial talk” and concentrate on the fundamental problems that had kept the development of the country at bay.

“We do not have good governance in the country and that is why we have a litany of problems confronting us. We are failing because we are building on a wrong foundation.

“We should be interested in asking the President to tell us his vision for the country for the next four years,” Ameer Bin Salih said.

According to him, until corruption was weeded out, no sustainable system could be built in the country.

“Our economy will remain bad because we are corrupt from A to Z. It comes from our homes, so what we need to focus on is good governance, how to tackle corruption and how to maintain discipline,” he added.

Dr Otoo also said the government should provide the needed support for the private sector to expand and create jobs to address youth unemployment.

“I recognise the expansion of the public sector workforce over the last four years, but there is a limit to how you can use the public sector to address the country’s unemployment situation. So we need to support the private sector to be able to absorb large numbers to make sure people don’t finish school and, after five years, not have work to do,” he said.

He also urged the government to tackle the challenges in the pension sector by taking another look at the pension law to ensure that people who retired took home decent benefits.

Dr Kwakye asked the government to finance the activities of oversight bodies such the Economic and Organised Crime Office (EOCO), the Office of the Special Prosecutor (OSP) and the Auditor-General directly from the Consolidated Fund to ensure their independence from the Executive.

He said corruption, which is a canker in the country, needed to be uprooted.

On the 1D1F, he said: “No country has developed without industrialisation because over dependence on imports leads to the depreciation of the local currency.”

He, therefore, urged the government to reexamine the 1D1F policy and link it to mechanised agriculture.

“Agriculture is our sleeping giant, but we are still recording low productivity in the sector because we are still farming with basic tools. We need to mechanise agriculture and create irrigation facilities across the country,” he added.

For his part, Mr Terkper called for a public discussion on the use of oil revenue by agreeing on how such funds should be dispensed.

According to him, every government was likely to face challenges, but said the decisions of the government would determine the soundness of the economy during difficulties.

“What you do is set aside some of the funds from oil revenue to cushion the economy in difficult times, and that is why we created the Heritage, the Sinking and the Contingency funds,” he said.