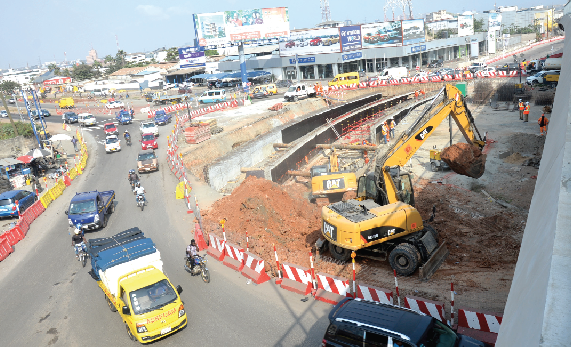 Construction works have begun on the second phase of the Obetsebi-Lamptey Interchange project.

The second phase covers the third tier of work from the interchange towards the Abossey Okai road, as well as underground storm drains from the Hyundai stretch of the roundabout to Mpamprom, near Kaneshie.

The storm drain will help address the perennial flooding in the area.

There were also earth-moving equipment and trucks digging and filling gulleys.

With the opening of the second tier flyover, which constituted the first phase of the project, to traffic last year, the gridlock which often occurred in the area has reduced.

The first phase, which was valued at $35 million, was completed in November last year, five months ahead of schedule, and involved the construction of the second tier interchange from the Graphic Road towards Kaneshie; east to west.

It also involved the construction of two (5 x 2 metre) 550-metre viaducts and ramps between the Graphic Road and the Dr. Busia Highway (Kaneshie-Mallam Road).

The second phase of the project involves the construction of a third tier flyover from the Abossey Okai Central Mosque side of the road towards the STC Yard. Its design and construction will span two years.

The project is being executed by QG Construction Limited of the UK, with FAS Consult Ltd as consultants.

According to the Resident Engineer of FAS Consult Limited, Mr. Owusu Sekyere Antwi, the third tier was expected to cost more than the second tier, since it involved much work.

He further said the first tier of the project, which includes the existing roundabout, would be remodelled and maintained.

He said work was also being finalised on the design of the flyover of the phase two project, adding that “once the designs are finalised, we will quickly start the excavation. We are taking advantage of the dry weather to do the storm drain”.

Mr. Antwi said a traffic management system was also being put in place.

The contract for the design and the construction of the interchange and other ancillary works was signed in October 2016.