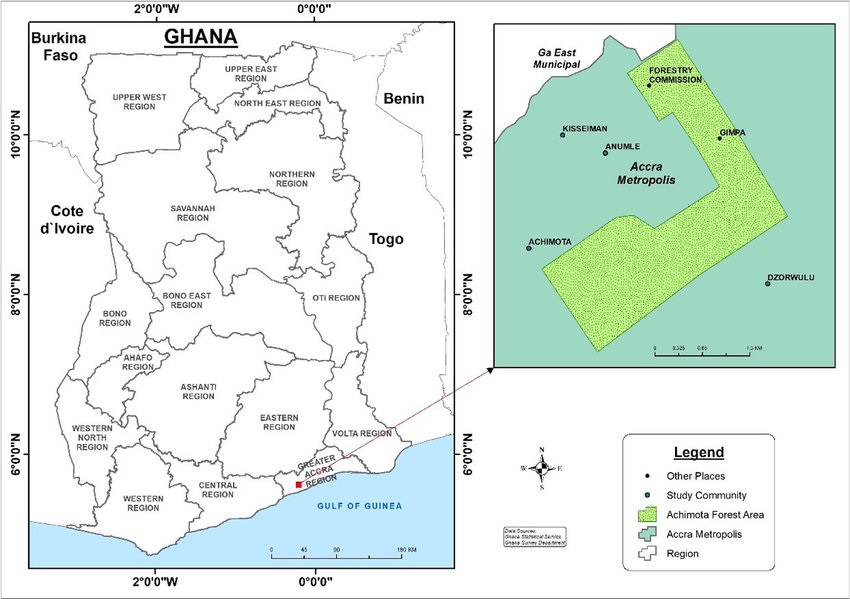 Some portions of the Achimota Forest in Accra, in the southern periphery close to the N1 highway, handed over to the Owoo Family in 2013, is no longer a forest reserve.

It follows the coming into force of the Executive Instrument (E.I.) 144 gazetted on behalf of President Nana Addo Dankwa Akufo-Addo on April 19, 2022 by the Minister of Lands and Natural Resources, Samuel Abu Jinapor.

This means effective May 1, 2022, those portions, [361 acres] sections of which had been developed, and had already been granted to the Owoo Family in September 2013 is no longer a forest reserve.

In 2007, the Owoo Family, the 1927 pre-acquisition owners of the land petitioned the government during the tenure of President John Agyekum Kufuor to release the un-used portions of the forest in the southern periphery to the family in lieu of compensation, which had not been paid over the years since 1927 when the land was acquired by the state.

In 2008, the government agreed to lease the southern periphery of the forest to the family for a period of 99 years.

In 2011, the Owoo Family again petitioned the government during the tenure of President John Evans Atta Mills on the issue and another committee was constituted to look into the petition.

After the government was satisfied with the Owoo Family's application, President John Dramani Mahama released the portions in the southern periphery to the family in September 2013.

The government working through the Forestry Commission also decided to convert the forest itself into an Eco-Park.

Therefore the 1930 Instrument which classified the entire area as a forest reserve needed to be amended.

President Akufo-Addo under Executive Instrument 144 on April 19, 2022 therefore lifted the 1927 classification of those portions of the Achimota Forest in the southern periphery as a Forest Reserve.

The EI 144 was published together with the Forests (Achimota Firewood Plantation Forest Reserve) (Amendment) Instrument, 2022 (EI 154).

Further, EI 154, on the other hand, states emphatically, the area of the forest shall remain a forest reserve.

Both instruments contain adequate provisions that seek to protect the ecological integrity of the forest reserve.

Following the publication of the Forests (Cessation of Forest Reserve) Instrument, 2022 (Executive Instrument (EI) 144), there have been media reports, especially on social media, with some suggesting that the Achimota Forest Reserve has been sold.

But addressing a press conference in Accra Tuesday evening [May 17, 2022], Mr Jinapor entreated the public to disregard the reports as they were false, baseless and non-factual.

“Indeed, what the propagators of these messages have refused to add is that, EI 144 was published together with the Forests (Achimota Firewood Plantation Forest Reserve) (Amendment) Instrument, 2022 (EI 154),” the minister said.

“Achimota Forest has not been sold and will not be sold,” the Minister stated. 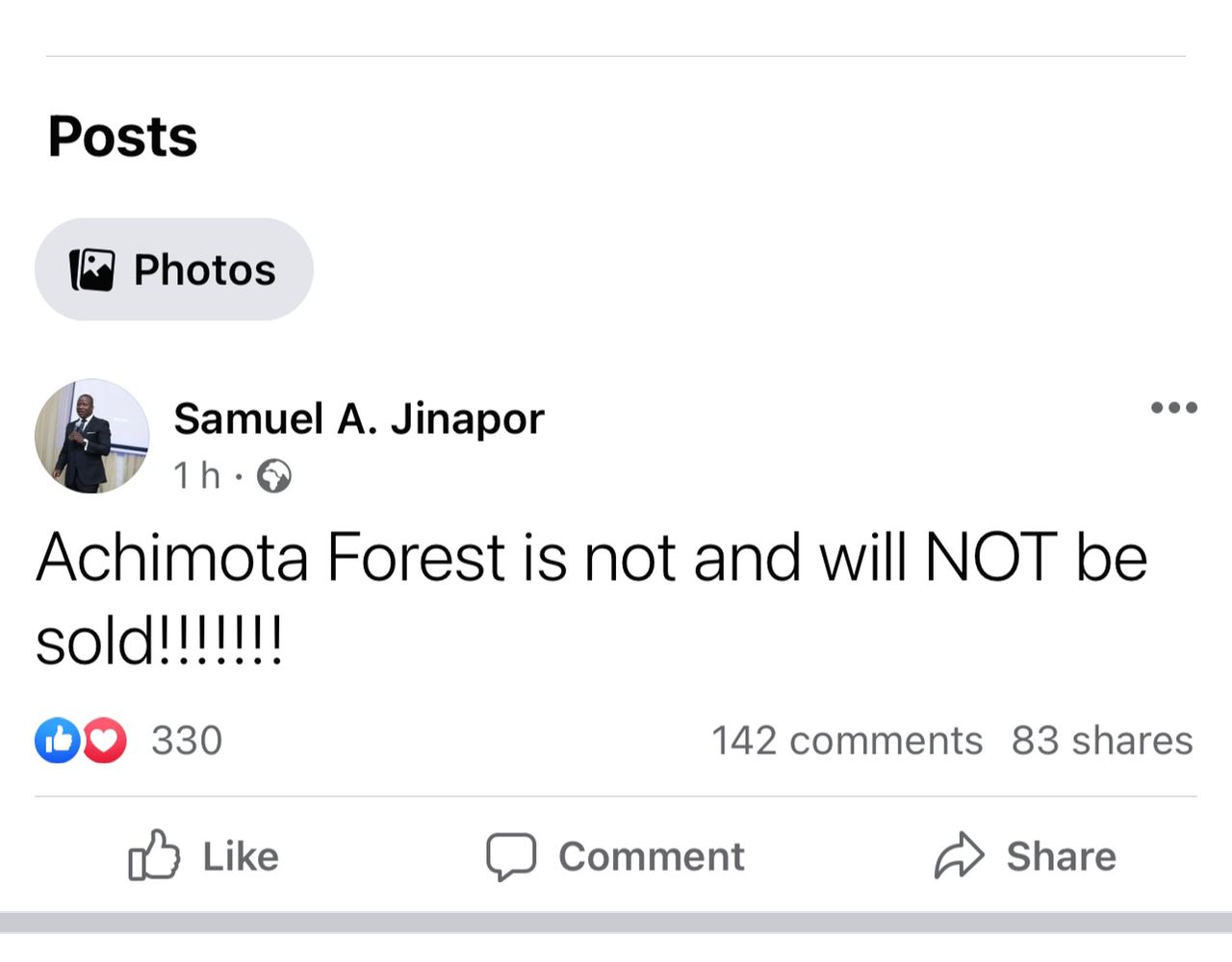 The Achimota Forest Reserve is the only existing urban forest in Accra sandwiched by Achimota School to the West, Ghana Institute of Management and Public Administration (GIMPA) to the East, Christian Village to the north and the George Walker Bush Highway (N1 Highway) to the south

There has been some public reactions since the gazette started circulating Tuesday morning [May 17, 2022].

Some had expressed concern about the fate of the only extensive green area in Accra on whether the green is going to give way for concrete.

Meanwhile the Forestry Commission in 2018 announced that it was reviewing the terms for the construction of the Achimota Eco-Park with the investor.

The decision, the commission said was part of due diligence it was carrying out to ensure that the project was executed and not abandoned midway.

Contrary to information in the public domain then, the commission said it had no intention of changing the investor, who was investing $1.2 billion in the project, whose sod cutting was performed on August 19, 2016.

According to the commission, it had engaged the investor and was trying to do everything possible to ensure that the project took off. 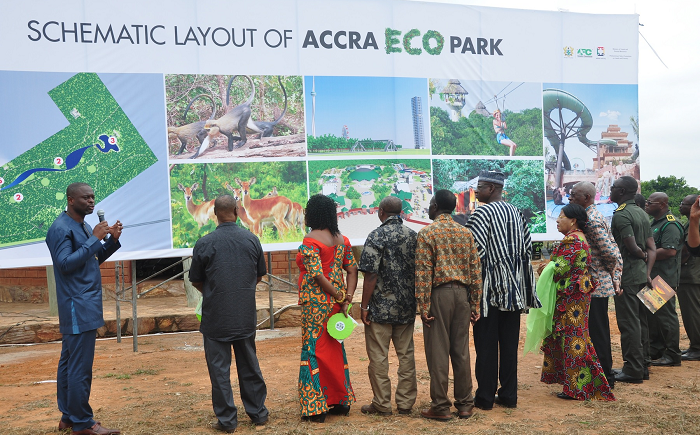 It will be recalled that Graphic Online published in 2018 that the Achimota Eco-Park project was expected to dramatically improve the Achimota Forest, curtail encroachment and eliminate the domestic and industrial waste dumped in the area.

It should have started in 2016 but had to be put on hold because of a legal action initiated by four Ghanaians who were of the view that the deal would harm the environment and pose health and other risks to residents of Accra.

But the then President John Dramani Mahama, in a speech read on his behalf, said the case had been “settled amicably and the project is back on track”. 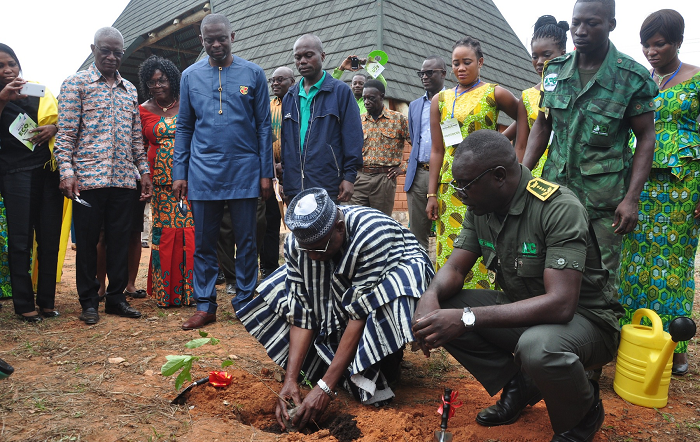 The first phase of the Accra Eco-Park Project, the city’s only green belt, was expected to be completed in 24 months to add to the country’s major national parks — Kakum in the Central Region and Mole in the Northern Region.

The lease agreement allows Aikan Capital to design, build and operate the facility for 10 years.

The project involves the construction of amusement parks, orchards, arboretum, wildlife safaris, museums, eco-commercial enclaves and eco-lodges but with little disruption to the natural vegetation as possible.

It will also have a spiritual enclave to cater for spiritual/worship activities that send more than 180,000 people annually to the Achimota Forest.
Apart from the recreational facilities, the development partners have plans for conference rooms with high-seating capacities targeted at corporate bodies. They will be sited outside the main forest area.

The Achimota Forest Reserve was gazetted (as a forest reserve) in 1939 with objectives, including serving as a field laboratory research for schools in Accra, providing a place for recreation, conserving biological diversity, as well as playing the ecological role of purifying the air in the city.

However, years of unbridled encroachment has reduced the size of the forest from its original 495 hectares to 355 hectares and portions turned into waste disposal sites.

In the speech read on his behalf, then President Mahama had said rather than allow further encroachment and the dumping of waste into the forest, the government had decided to convert it into a world-class recreational facility and major tourism destination in West Africa.

But critics of the project, including the current Minister of Environment, Science, Technology and Innovation, Prof. Kwabena Frimpong-Boateng, had insisted that the country would not derive enough environmental benefits from the eco-park project and that “rather it is the Atiwa and the Kakum National parks which could give a lot of benefits when they are turned into eco parks”.

According to Forestry Commission projections, the eco-park project will create about 4,000 jobs during the construction phase and 2,000 direct and 10,000 indirect jobs when it begins to function.

While its critics fear that the project will destroy the city’s only greenbelt, the then Chief Executive Officer of Aikan Capital Limited, Mr Oheneba Otchere, told Graphic  Online that the project would ensure that at least one million trees were planted to further strengthen the forest cover.

Below is a copy of the Executive Instrument 144