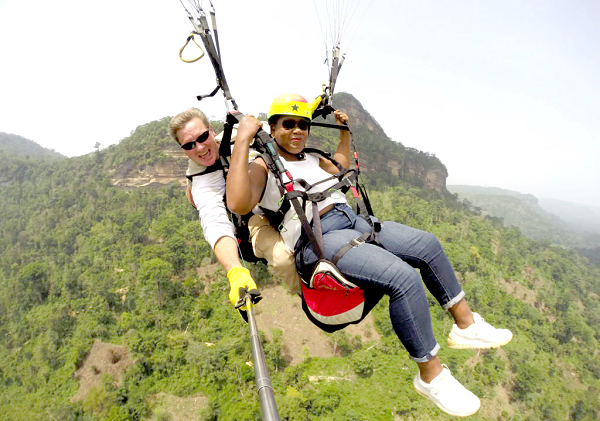 This year's edition of the paragliding festival, which is normally observed during the Easter period on the Odweanoma Mountain, near Atibie in the Kwahu South Municipality in the Eastern Region, has been officially launched.

The festival involves flying in unmotorised crafts with the help of the wind.

The festival which normally attracts paragliders and pilots from countries such as the United Kingdom, France, USA, South Africa, Canada, Japan and Romania, among others, has not taken place in the past two years due to the COVID-19 pandemic.

The pilots usually take off from the top of the Odweanoma Mountain and circle Nkawkaw before landing at the Nkawkaw Sports Stadium.

Until the COVID-19 outbreak forced a stop of the annual Kwahu paragliding festival, it had become a popular tourist attraction, which put the area on the world tourism map for decades.

At a short ceremony to officially launch the event at Abene, the seat of the Kwahu Paramountcy last Wednesday, the Chief Executive Officer of the Ghana Tourism Authority (GTA), Akwasi Agyeman, said as usual foreign pilots would be honouring the invitation to display at the festivities which start from April 15 to April 18.

He said his outfit had engaged event organisers and other key stakeholders in Accra to look at ways of making the event successful and incident free.

He said that this year's event would not be business as usual but would be streamlined by licensing event organisers, merchandising and adhering to COVID-19 safety protocols, among others.

The GTA, Mr Agyeman said, would be making available a guide to inform tourists and the general public about the various events and other vital information about the festivities.

The CEO indicated that hoteliers, event organisers and other key stakeholders would be given the opportunity to advertise their products.

He said GH¢550 was the proposed fee for flying with the pilot, while another GH¢50 would be required for rapid antigen test for passengers before they would be allowed to fly.

Mr Agyeman also divulged that a Local Organising Committee (LOC), comprising representatives from the municipal and district assemblies, Kwahu Traditional Authority and other institutions, had been put in place to effectively do the underground work for the festival.

The Deputy Chief Executive Officer (CEO) of GTA in charge of Operations, Ekow Sampson, dwelt extensively on the observation of the COVID-19 safety protocols, saying his outfit had engaged the national COVID-19 taskforce to compel people to adhere to the protocols, such as handwashing, wearing of face masks and the frequent use of hand sanitisers.

He indicated that the GTA would ensure that patrons had been vaccinated against the COVID-19, adding that people who had not been vaccinated would also be given the opportunity to do so.

That, the DCE stated, would help deal with criminals and other trouble makers before, during and after the celebration.

According to Mr Agyapong, because the event had not been celebrated for the past two years due to COVID-19, thousands of visitors from both home and abroad were expected to participate.

He also said the area would witness a boost in economic activities such as the selling and buying of a number of items or commodities.

The Kwahu Pepeasehene and Kyidomhene of Kwahu, Nana Bonsu Ayirepe Ababio II, who represented the Paramount Chief of the Kwahu Traditional Area, Daasebre Akuamoah Agyapong, called on the business community in the area to collaborate with the GTA to ensure that business activities brought in more revenue to the people.

The chief appealed to the government through the GTA to work in such a way that more job opportunities would be made available in the area to engage the teeming unemployed youth.

That, according to him, would prevent the unemployed youth from travelling to big cities such as Accra, Tema and Kumasi to seek white collar jobs.