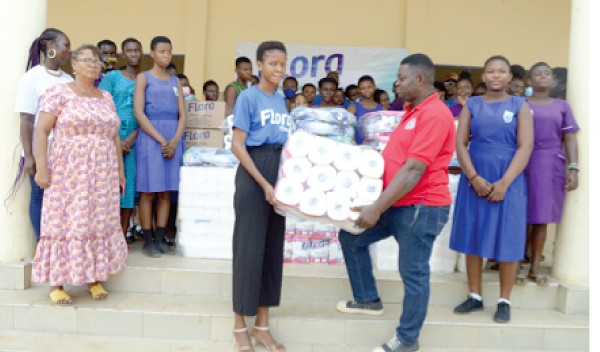 The Delta Paper Mill Limited, manufacturer of Flora brand tissues, has donated varied tissue products and washing powder worth GH¢6,000 to the Akropong School for the Blind and the Tetteh Ocloo State School for the Deaf in the Eastern and Greater Accra regions respectively.

The donations were part of the company’s Flora Cares initiative, a corporate social responsibility undertaking instituted as an enabler to promote desired sanitary conditions in schools across the country.

Thus far, the company — via Flora Cares — has distributed tissue products to selected institutions nationwide, with over 70 schools and three hospitals benefiting from similar donations across four regions.

In the case of the special needs schools, the current donations followed similar ones made at the Sekondi School for the Deaf and the Dzorwulu Special School.

In her brief remarks, the Marketing Director of the Delta Paper Mill Limited, Barbara Incoom, observed that the company deemed it a privilege to donate to the schools.

She said the donations would assist administrators and students in maintaining favourable sanitary conditions at school.

An instructor at the Akropong School for the Blind, Mr Gideon Doyi, thanked the company for the donation, saying it was a timely gesture.

“The institution is run and sustained 100 per cent on government support. So, these corporate donations go a long way to supplement efforts. Our doors are open and we welcome and look forward to more of these donations from other corporate bodies in the future,” he said.

Meanwhile, Isaac Attah of the Tetteh Ocloo State School for the Deaf gave the assurance the items would be put to maximum use for the benefit of the school.

He also applauded the company for the donation, noting that such gestures complemented the government’s effort in the everyday running of the institution.