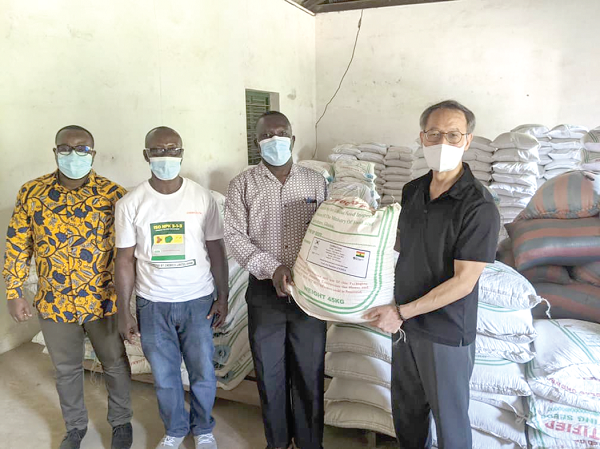 Dr Kim Sang-Yeol (right) handing over the seeds to Dr Peter Omega, the Central Regional Director of Agriculture, for onward distribution to beneficiary districts. With them are officials of the Ministry of Food and Agriculture. Follow @Graphicgh

Distribution of certified improved AGRA rice seeds to about 514 farmers in the Central Region has begun under the Rice Value Chain Improvement (RVCI) project.

This was after the Plant Protection and Regulatory Services Directorate of the Ministry of Food and Agriculture certified the seeds as having over 90 per cent germination rate.

The about 514 farmers in eight farmer-based organisations in nine communities from the five beneficiary districts would begin planting the rice seeds in March and April this year.

The RVCI project was launched in an effort to reduce the country's rice importation through increased yields and targets supplying a total of 48 tonnes of improved AGRA seeds to rice farmers in the Central Region.

The RVCI project is aimed at making Ghana a significant rice producer, by restructuring and producing high quality seeds for sowing, ensuring efficient farm management systems, while adopting advanced technology for the processing of rice.

The project is funded by the government of Korea through the Korean International Cooperation Agency (KOICA), with the prime objective of improving the quality of life of farmers in the region through increased rice output, strengthened post-harvest management capacity, improved rice processing and packaging and strengthened farmer-based organisations' capacity and marketing support.

The project will also improve the value chain and marketing and branding techniques for rice, to revolutionise rice production in the Central Region first and the country in general.

Launched in June 2021, already experimental farms of the RVCI have proven to the farmers that they should expect significantly high yields.

At a ceremony to hand over the seeds to some beneficiary districts in Cape Coast recently, the Central Regional Director of Agriculture, Dr Peter Omega, indicated that the distribution of the seeds was a further assurance of all stakeholders’ commitment to the attainment of the project's goals.

Dr Omega said measures were being put in place to ensure that after the project's implementation in 2023, the planting of high quality rice seeds would be fully scaled up to involve all rice farmers, including those under the Planting for Food and Jobs programme, for maximised impact and yields.

"This project should help us understand enhanced production techniques from our Korean partners and to achieve more with producing at least the rice we consume," he said.

He indicated that the AGRA rice was highly nutritious, adding that the MOFAD would work with relevant agencies to ensure that markets, schools and other institutions and individuals all patronised grown in Ghana rice.

The Central Regional Plant Protection Officer, Mr Benjamin Yaw Ayim, observed that the seeds had gone through a rigorous process, adding that the certification had been done with germination and purity test done. He said he was hopeful the seeds would positively impact rice production in the region.

The Central Regional Extension Officer, Ms Sophia Afful, said her outfit was fully committed to monitoring the various farms, particularly under the project, to ensure efficiency from sowing to weeding and farm management, disease control and harvesting were all done under enhanced agronomic practices.

The Director in charge of the project, Mr Hubert Dela Fiawoo, said all stakeholders had played significant roles in bringing the project to its current level.

He said he was optimistic that with the relevant support farmers would increase yields and incomes and also impact the rice production fortunes of the country.

The Project Director, Mr Kim Sang-Yeol, in an interview said with commitment to the project, Ghana should be able to be rice production sufficient to help reduce importation.

The Municipal Agriculture Director for Assin Fosu, Mr Francis Kwame Freeman, said the goal of the project was commendable and expressed the hope the it would quickly be scaled up to other farmers in the rice growing communities.