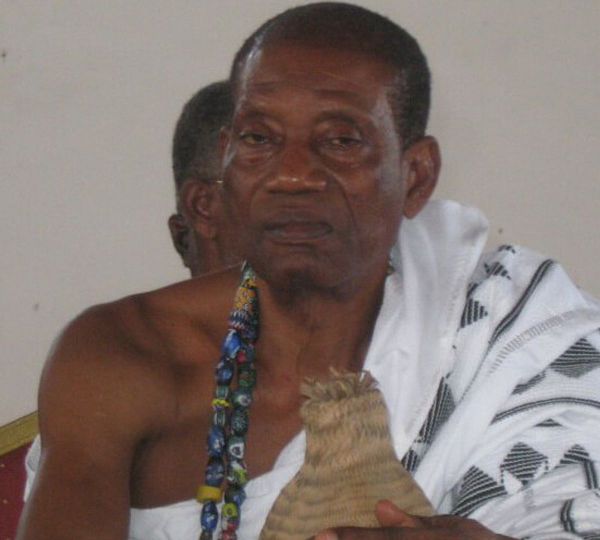 The late La Mantse, Nii Dr Kpobi Tettey Tsuru III, was buried in the early hours of this dawn after elaborate traditional and burial rites which started on March 7.

The final farewell ceremony was characterised by a display of tradition and culture as the people of La celebrated the man who for 30 years was their overlord and one of the longest-serving chiefs.

A sea of red and black took over the La Royal Palace court as people from all walks of life converged for the grand burial ceremony to bid the traditional ruler who died three years ago farewell.

After all the necessary rites, including the burial service, the casket bearing the remains of the Nii La was paraded through the principal streets of La for the final time last night, before being conveyed to the Royal Mausoleum for the burial at midnight.

The final ceremony was preceded by a week-long activities, with President Nana Addo Dankwa Akufo-Addo last Wednesday leading a government delegation to pay their respects as the late Nii Tsuru III lay in state. 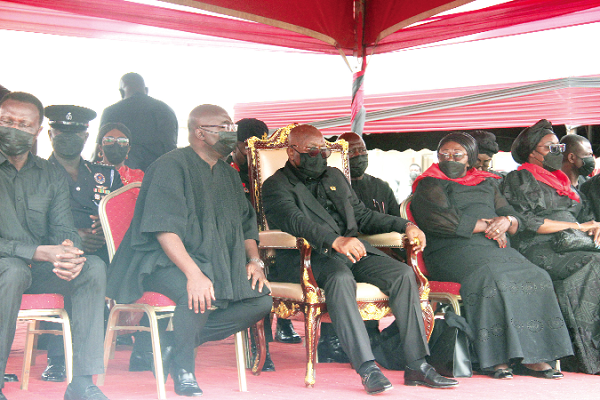 Among the hundreds of mourners were the indigenes of La, representatives of corporate bodies, the diplomatic corps, including the US Ambassador to Ghana, Mrs Stephanie Sanders Sullivan, and the French Ambassador, Ms Anne Sophie Ave, as well as some politicians and clergymen, all from far and near, united in grief.

It was a display of a blend of culture and tradition with the continuous firing of guns, pouring of libation, chanting, traditional dancing and drumming which at a point gave way for a non-denominational burial service to send off the Nii La who died at the age of 89 years.

Various groups of the GaDangbe State kept pouring onto the funeral grounds to pay their last respects amid gunshots in the course of the non-denominational burial service.

Among the traditional leaders were the Prampram Mantse, Nene Tetteh Waka III, Teshie Mantse, Nii Ashitey Akomfra III, and the Nungua Mantse, Nii Odaifio Wulentsi III, in their full mourning regalia made up of red and black cloths and ornaments.

All morning, the body of the late Chief lay in state in the room prepared for the purpose and people went in and out to pay their final respects and even as the burial service went on people were allowed to view the body.

However, at 3:00p.m, the door to the room was closed for the necessary customary rites to be performed.

Before he was put in a casket, the Asafo, Amlakui, Woyei and Asafoatsemei again performed the necessary customary rites after which the body was brought outside for the first time to perform the “Obonu” dance to the public.

He was then escorted by traditional leaders and indigenes to some shrines to bid his final goodbye.

The final rites included the slaughtering of a cow at the mausoleum and that was mainly done by the Asafoatsemei.

As if it was timed, an hour to midnight, everyone who had followed the cortege to the mausoleum was dismissed, leaving the traditional leaders including the Woyei and Asafoatsemei for the private burial ritual and burial.

In the quietness of the time, the firing of muskets was heard, signalling that the ceremony had ended.

During the day, tributes poured in and it was observed that almost everyone who was at the funeral grounds had a copy of the day’s Daily Graphic which carried a special pull-out on the late Nii La.

Majority of the mourners who also paid tribute, described the late chief as one who paid attention to detail, a man of equity and fairness, light-hearted, humble, a peace advocate and caring.

The widow, Mrs Doris Darkua Pobee, described her late husband as humble and a real gentleman, despite his stature, who kept his doors open to all during his reign.

“I am grateful to have enjoyed almost 50 years of marriage with him, and I am consoled by the knowledge that he served his Lord faithfully and has been called to rest from his labours,” she said.

Former President Mahama, in his tribute, described the late Nii La as a man of dignity and of peace.

“We pray that the peace he gave to the La Traditional Area will continue to survive.

The Shikitele of the La Traditional Council, Nii Adjei Koofeh IV, who read the tribute on behalf of Council, described the late Nii La as a quiet but strong-willed person and one who believed in fairness.

“ He was a deep and meticulous person who carefully scrutinised issues and documents before taking decisions.

“Though Nii was modest and humble, he was a disciplinarian and a blunt person who never minced words to put across his views,” he added.

At about 1 p.m., when all the tributes had been read, a non-denominational service was held, with Rev. Dr Abraham Nana Opare Kwakye giving the exhortation.

Basing his message on 2 Corinthians 5:20, Rev. Dr Kwakye charged the mourners to emulate Christ by advocating peace wherever they found themselves as a befitting tribute to the late chief who ensured that peace and stability prevailed in his traditional area during his reign.

He further prayed for the family of the late Nii La.

Subsequently, he led the clergymen to perform the committal which brought the service to a close.

After the curtains had been brought down on the non-denominational service, the Asafoatsemei and Asafoanyemei, clan leaders and other traditional authorities took turns to perform the necessary rituals.

The burial of the paramount chief of La State was preceded with a two-day file past by many dignitaries made up of political and religious leaders, the diplomatic corps, state institutions and corporate bodies.

Apart from President Akufo-Addo, Vice-President, Dr Mahamudu Bawumia; the Chief of Staff, Akosua Frema Osei-Opare; the Minister of Information, Kojo Oppong Nkrumah; the Minister of Lands and Natural Resources, Samuel Abu Jinapor; the Minister of Communications and Digitalisation, Ursula Owusu-Ekuful and the Minister of Education, Dr Yaw Osei Adutwum were also at the funeral.

Additionally, the Greater Accra Regional House of Chiefs; the United State Ambassador to Ghana, Stephanie S. Sullivan; the District Grand Lodge of Ghana, the National Lottery Authority, MTN Ghana and a delegation from Labadi Beach Hotel, led by its manager, Rene Vincent-Ernst, among others, were present.

Enstooled in 1988, Nii Tsuru III was regarded as one of the longest paramount chiefs of the La State until his demise in February 24, 2019.
As one of the longest-serving traditional leaders in the Greater Accra Region, he was a familiar face at most public and state functions.