Thirteen people perished on Sunday in a vehicle accident at Ohene-Nkwanta near Konongo in the Ashanti Region.

Kwadwo Baffoe Donkor, reported that nine of them were males with the remaining four being females.

They reportedly died on the spot on Sunday, September 3, 2021 evening.

The bodies have since been deposited at the Stewards Hospital Mortuary at Yaw Kwei awaiting identification and collection.

The incident occurred at around 10:50 pm in a curve at Ohene-Nkwanta on the Kumasi-Konongo highway. 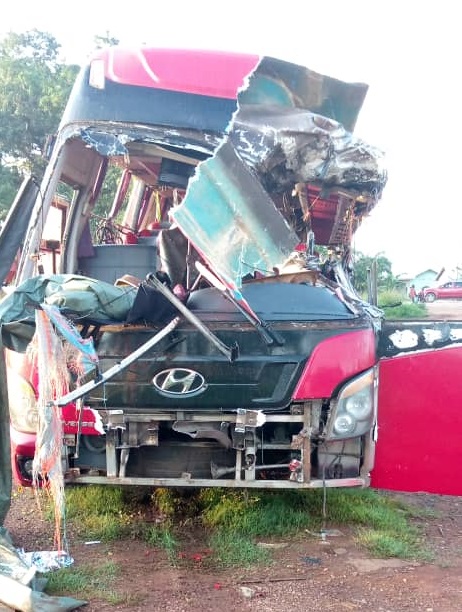 The Ashanti Regional Police Commander of the Motor Traffic and Transportation Directorate, Superintendent, Mr Emmanuel Adu-Boahen, said at around 10:50 pm on Sunday, one Bayiblisi Madewe aged 38 in charge of the DAF truck loaded with about 600 bags of pepper travelling from Kumasi toward Accra, ran into the rear portion of MAN diesel truck with registration number GW-3569-13 being driven by one Iddrisu Seidu.

He said the impact threw the DAF truck off track and he veered off and run into the path on the oncoming vehicles and subsequently crashed “Into the offside of the OA bus.”

He said the injured have also been sent to the Konongo Odumase Government hospital for treatment.