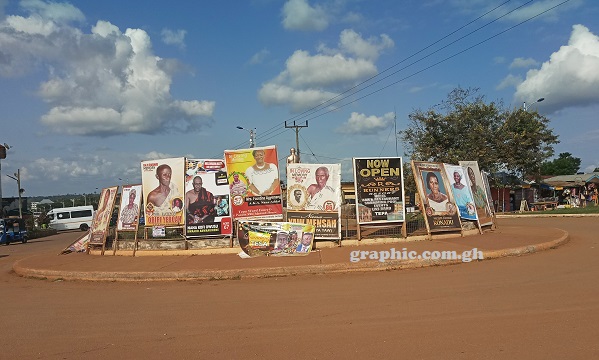 Billboards take over a roundabout in Tepa in the Ashanti Region making it difficult for motorists to see vehicles on other side. Picture: DOUGLAS ANANE-FRIMPONG
30.5k Shares

Billboards and outdoor advertisements are an essential part of branding and marketing for businesses and a major source of revenue for the nation, especially advertisers and city authorities.

In recent times, however, billboards in the national capital, Accra, have become a clutter along the roads, posing a threat to road safety.

The Daily Graphic has observed that many of those billboards have become dilapidated and the way they are cluttered along the streets poses a threat to pedestrians and drivers alike.

What is worse, some ceremonial routes have not been spared this menace, a development which has also affected the beautification of the city.

A visit to some parts of the city, such as the Tetteh Quarshie-Adenta route (N4), the Kawukudi Junction, the 37 Military Hospital Intersection, the Liberation Roundabout, as well as the Accra-Kasoa route, revealed that the situation was worse in those areas, creating a lot of challenges for drivers in terms of road visibility.

These observations were corroborated by the Head of Communications at the National Road Safety Authority (NRSA), Mrs Pearl Adusu Gyasi, who said external distractions from billboards were life-threatening factors for road safety in the country.

She noted that billboards distracted drivers more, compared with other items they saw in their physical driving environment.

She said it was critical for the various assemblies to be very prudent with regard to billboard placement to ensure sanity on the roads.

The situation seems to suggest that the authorities in charge of regulating and siting billboards are bending the rules, as far as safety is concerned, to cash in on the revenue the venture brings.

Also, being able to afford the cost, advertisers seem to be making use of every available space along these routes to promote and sell their brands, with no regard for the silent contribution of some of these billboards to the occurrence of road accidents.

Bye-laws seem to have been ignored by advertisers due to the high demand for brand and brand promotion in the city.

While agreeing that some of the billboards posed a threat to lives, the Executive Director of the Advertising Association of Ghana (AAG), Mr Francis Dadzie, blamed the situation on some assemblies which considered billboard advertisement as a means of revenue generation.

In an interview, he said that situation had resulted in individuals without the requisite technical know-how giving permits for billboards to be mounted and thereby creating clutter and endangering lives.

“They don’t consider the beautification of the city and the risk these billboards can pose. Billboards are supposed to be positioned to enhance the value and businesses of the city, but due to these irregularities, there has been a total decline in advertising in the country,” he said.

Mr Dadzie gave an assurance that in spite of how extensive the situation had become, the AAG was not going to relent in its effort to liaise with the authorities to enforce the law.

The President of the International Advertising Association (IAA), Mr Joel Edmund Nettey, had, in the past, expressed worry about the lack of clear demarcation among metropolitan, municipal and district assemblies (MMDAs) in the Greater Accra Region.

In an interview with the Daily Graphic a year ago, Mr Nettey, who is also the President of the AAG, observed that over the years, there had been total disregard for the National Outdoor Advertising Standard, a policy produced in 2010 to ensure that structures such as billboards did not obstruct roads or posed a danger to public safety.

“Permits are also granted without due diligence and, in most cases, no site inspections are conducted,” he said.

Some pedestrians and drivers also complained about the way some billboards were sited, saying they posed a threat to road safety.

“The situation is particularly bad on roads that have bends and junctions. Some billboards are so wide that although they are metres away from the roads, they obstruct visibility and one has to stretch out the head or get into the road to see if it is safe before joining it,” Musa Abdulai Abdallah, a driver who plies the Kaneshie-Kasoa route, said.

Another driver, Mr Boadi, said due to a past experience he had, he had become very careful when approaching billboards.

“One midnight when I was returning from Koforidua, just when I was about to enter Adenta, one dilapidated billboard collapsed onto the road and I nearly crashed into it. I escaped by a hair’s breadth. It would have been a disaster if I were driving at top speed,” he recounted.