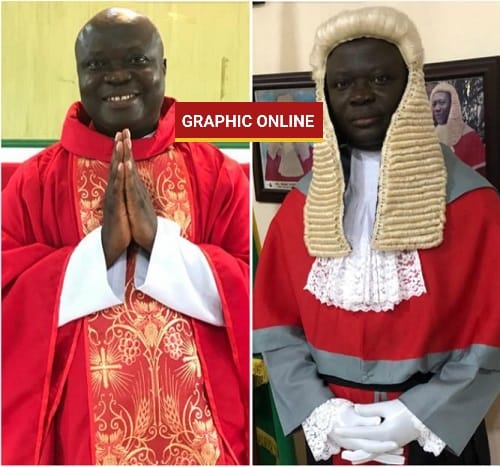 A Catholic Priest in Kumasi who has been appointed as Justice of the High Court can no more exercise his priestly ministry in public, the Catholic Church has said.

According to the church, he could only celebrate sacraments privately.

Concerns have been raised as to whether the Priest-Judge can perform a dual role.

Explaining the implications of the appointment in an interview with the Daily Graphic yesterday, the Chancellor of the Kumasi Archdiocese of the Church, Rev. Fr. Peter Sarpong, said apart from political appointments, the church did not stop its priests from serving offices, including serving as lecturers, to the security doctors, among others.

Justice Owusu Agyemang was among 16 individuals who were sworn in as justices of the High Court by President Akufo-Addo.

Speaking to the Daily Graphic day after claiming a slice of history as the first Ghanaian Catholic priest to attain such appointment, Justice Owusu-Agyemang,52, said he would not be in charge of any Catholic community until he retired as a judge.

"There will be no combination of roles here because I will not be in charge of any Catholic community until I retire as a judge," he said.

On remuneration, the former Director of the Kumasi Archdiocesan Legal Services Department, said: "I will receive remuneration from the Judicial Service alone."

Tracing his life trajectory, Justice Owusu-Agyemang revealed that he was called to the Bar on October 4, 2002, before he later completed his studies to become a priest in 2007 at the Grand Seminaire St Gall in Ouidah, Benin.

"Since 2007, it has been a constant practice of Law, alongside being a priest. So, I have been doing that over the years till I decided to apply to the Judicial Service for this position," he stated.

Justice Owusu-Agyemang added that his duties as a judge would only be influenced by the laws of Ghana.

Explaining the law which allowed Justice Owusu-Agyemang to accept the appointment, the Chancellor of the Kumasi Archdiocese said the church's law was epitomised by the last code that: "Salvation of souls is the supreme law of the church".

He said such appointments were only allowed by the Catholic Church provided that a Diocesan Bishop had judged that it contributed to their spiritual growth under the Canon Law.

Rev. Fr Sarpong urged Ghanaians to pray for the Priest-Judge to make a difference and be an evangelist in the Judiciary.

He has also served in various capacities including being a Legal Advisor to the Ghana Armed Forces, Member of the Board of Directors of the Nursing and Midwifery Training College at Dunkwa-on-Offin. Chairman of the Board of Directors of Marist Schools, Part-time Lecturer of the University of Education, Winneba, and a partner at the F&J Legal Consult.