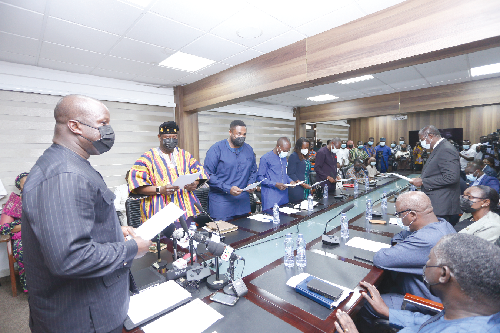 The Minister of Lands and Natural Resources, Mr Samuel Abu Jinapor, has sworn in the board of Ghana Integrated Iron and Steel Development Corporation (GIISDEC), with a charge on the members to implement policies and strategies that will help build a robust iron and steel industry.

The minister said GIISDEC was an "extremely important corporation" that would serve as an anchor for most of the government's industrialisation initiatives.

"It is common knowledge that all developed countries did so on the back of iron and steel, and we cannot industrialise if we do not have an efficient iron and steel industry that is fit for purpose.

The GIISDEC board is chaired by the Member of Parliament (MP) for Yendi in the Northern Region, Mr Umar Farouk Aliu Mahama.

The board has three other nominees by the President. They are Messrs Kay F. Amoah, Ernest Kusi and Ms Hanifa Yahaya.

The Ministry of Finance is expected to present a representative to complete the nine-member board.

Mr Jinapor observed that if GIISDEC was given the needed attention, the country would benefit immensely from it in terms of development "because almost every major industry depends on iron and steel."

For instance, he said, the rail sector would heavily depend on iron and steel to function well.

The minister said the composition of the board, which included lawyers, industry players, CEOs of regulatory bodies and other astute personalities gave him hope that the corporation would be strategically positioned to propel the country's industrialisation agenda.

For his part, Mr Farouk Mahama assured the minister that his team  would work diligently to build a robust iron and steel industry.

He said the board would work to ensure that the country's iron and steel industry reached its potential.

"Ghana's estimated  6.4 billion iron ore reserves are commercially valued at GH¢1.3 trillion and this resource, if properly tapped, will be a major foreign exchange earner for the country," he said.

Mr Farouk Mahama gave the assurance that the board would implement a strategic business plan to attract the needed investment for GIISDEC.