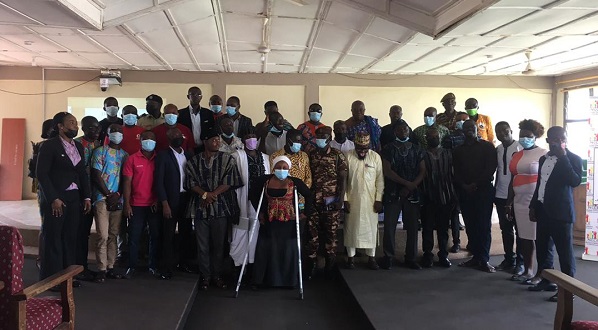 Following the recent killings at Ejura in the Ejura-Sekyedumase Municipality leading to violent protests, the Commission for Civic Education (NCCE) with support from the Ministry of National Security has engaged various youth groups to mend strained relations and promote peace.

It was to identify security gaps within the densely populated farming community, build bridges and synergies for development.

The sensitisation workshop on violent extremism brought together a number of experts including the judiciary on the consequences of violent activities.

The Director of the NCCE for Ejura-Sekyedumase Municipality, Mr Dujing Jacob Japiong, said the only thing that could stall development was conflict urging the youth including political parties to bury the past and forge ahead.

He said much as the death of Ibrahim Mohammed Kaaka was painful, he cannot be brought back to life.

"It is the reason I urge you all to learn from what has happened and allow the law to work," he told the youth.

Mr Japiong called on them to be law-abiding and live in harmony with each other to make progress.

He urged the youth to refrain from acts that have the tendency to derail the peace that the "good people of Ejura are currently enjoying".

"See yourselves as one people devoid of your religious or political affiliations. Peaceful coexistence is a shared responsibility and all must be involved in the peacebuilding process," he said.

On his part, the Ejura municipal magistrate, His Worship Divine Kwaku Ahaidu who spoke on grievance handling procedures following the Public Order Act 1994 (Act, 491) said people are grieved when they feel marginalised.

"When government officials misuse public funds and are not prosecuted, job opportunities are not fairly distributed, justice is delayed or denied; the youth will be grieved," he said.

The magistrate, therefore, urged the state to be fair in its distribution of national resources and try to carry along the marginalised groups with it to avoid conflicts.

He called on the Police to alienate themselves from political issues and the youth to not allow themselves to be used to wreck the nation.

Mr Ahiadu urged the youth to be willing to inform the security agencies about suspicious activities that could plague the country into chaos.

He called for alternate dispute resolutions to smaller issues since they were less expensive, efficient and promoted cooperation.

The former Ashanti Regional Director of NCCE, Mr Wilson Raphael Arthur, said people could get angry sometimes but when it gets to the extreme, it could become dangerous for any society.

"They do so to compensate their extreme anger by activities that makes them violent, which constitute violent extremism, creating an atmosphere of terror," he said.

Mr Arthur called for regular engagement with the youth to gauge their mood and take proactive actions.

Nana Nifahene from the Ejura Traditional Council blamed the recent disturbances on the indifference on the intolerance among people of Ejura.

"Naming ceremonies could even be turned political and could escalate to another level," he said.

The Nifahene called for frequent engagements and negotiations to protect the peace.