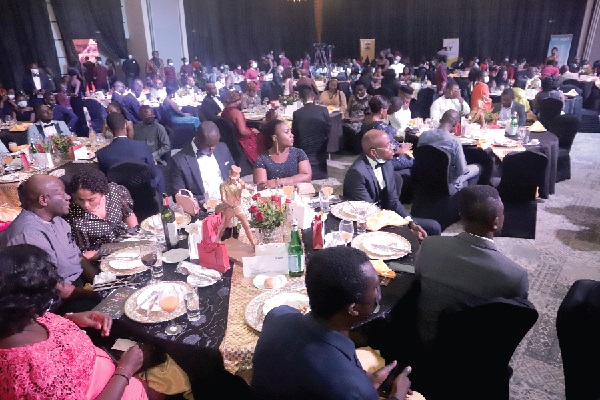 Some of the guests at the event. Picture: Samuel Tei Adano Follow @Graphicgh

President Nana Addo Dankwa Akufo-Addo has said the implementation of the new Corporate Insolvency and Restructuring Act (CIRA) will help turn the fortunes of businesses in the country around.

He said the passage of the act could not have come at a better time, as most businesses were facing severe financial challenges due to the prevalence of the COVID-19 pandemic.

The act, the President added, was a major reform that would provide a legal regime for the administration of businesses, including those of distress companies.

President Akufo-Addo said this in a speech read on his behalf by the Attorney-General and Minister of Justice, Mr Godfred Yeboah Dame, at the 2nd Ghana Association of Restructuring and Insolvency Advisers (GARIA) Presidential Fundraising Dinner in Accra last Saturday.

The GARIA is an association of professionals with focus on corporate restructuring, business recovery and insolvency advisory services in the country.

The event was on the theme: “The corporate insolvency and restructuring act: A vital lifeline for distressed businesses amid COVID-19”.

Some founding governing council members of GARIA were given recognition for their contribution to the affairs of the association.

The CIRA, which replaced the Bodies Corporate and Official Liquidation Act 1963 (Act 180), was signed into law on April 30, 2020 and has features which could go a long way to assist businesses not only to survive the pandemic but also recover from its effects.

The act applies to all businesses registered under the Companies Act, 2019 (Act 992), with a few exceptions, such as banks, insurance or any other business which is subject to special legislation, except instances when the special legislation does not provide a rescue provision, such as the Security Industries Act, 2016 (Act 929).

The President said for the first time in the history of Company Law, Ghana now had a rescue provision which allowed for the restructuring of distress but potentially viable companies.

Already, he said, the new Companies Act 2018, Act 992, which was passed to reform company practice in Ghana, was achieving its objectives of enhancing good corporate governance and business activities, modernisation and incorporation of international best practices.

“I am extremely delighted that after so many years of stakeholder consultations and engagements, the act has been enacted and many business people and academia have congregated here this evening to celebrate its passage,” the President said.

According to the President, GARIA’s prime objective was to play a leadership role by helping to develop an efficient regime to tackle corporate insolvency and restructuring, as well as enhance corporate governance and economic growth and development in the country.

In the over 50 years of its existence, he said, GARIA had organised workshops, pubic lectures, press interactions and sensitisation engagements with executive banks, the business community and the Judiciary.

President Akufo-Addo recalled that two years ago, the entire nation had to go into a disaster recovery mood with the onset of the COVID-19 pandemic, which led to some measures being imposed on the nation.

The Chairman of the fund, Prof. Philip Ebow Bondzi-Simpson, said the first batch of certified insolvency practitioners in the country would be inducted into office on December 1, 2021.

The induction ceremony, he said, would be a collaboration between GARIA and the International Finance Corporation (IFC), a World Bank Group, and the Registrar-General’s Office.

Prof. Bondzi-Simpson said that would pave the way for licensed insolvency practitioners to help turn around ailing businesses.

He sad GARIA had, over the years, been championing the cause of business law reforms and had relied heavily on membership subscriptions and well- meaning development partners, sources which he said had been erratic and proved to be unsustainable.

He, therefore, appealed to individuals and organisations to donate to the trust fund, which would be the principal financing vehicle for the association.

According to him, the fund would be governed by an independent Board of Trustees with diverse backgrounds and experiences in accounting, banking, law, business, investment, among other fields.