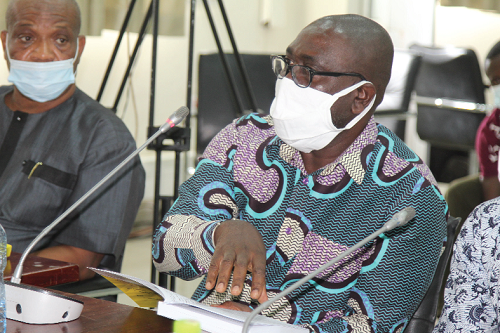 The National Media Commission (NMC) is engaging the Electoral Commission (EC) and other organisations to implement an integrated technology for real-time monitoring of the media space and electoral activities in the December 7, 2020 elections.

The Executive Secretary of the commission, Mr George Sarpong, who disclosed this, said the technology was based on cloud sourcing and would help identify fake news.

"With this system, wherever you are, if you find something on radio or television that is of concern to you, you will just send it to us. The material is time stamped and location stamped; and it helps us to tell immediately where it is coming from,” he said.

Mr Sarpong stated this when the NMC appeared before the Public Accounts Committee (PAC) of Parliament yesterday to respond to some queries cited against the media regulator in the 2017 Auditor-General's report.

He was responding to a question posed by the Member of Parliament (MP) for Ningo-Prampram, Mr Sam George, who wanted to know how prepared the NMC was to effectively monitor excesses in the media space ahead of the December 7 polls.

The National Democratic Congress (NDC) MP also sought to know if the NMC had the capacity to deliver on that mandate.

While admitting that the NMC lacked the capacity to wholly monitor the media space in the December polls, he said the commission was working with local and international partners to roll out the monitoring system.

"We have already done a demonstration of the system to the Coalition of Domestic Election Observers (CODEO) and we are hoping to work with them because they will also benefit, since the initiative will give real-time information on what is happening in every polling station and every constituency.

“I have also made a request to the EC to see if we can work together and we are really pushing for this,” Mr Sarpong said.

On fake news, the Executive Secretary of the NMC said the integrated monitoring system would largely address that menace because citizens could easily verify the authenticity of media content when the system was implemented.

"Sometimes people share videos that are three years old or portray incidents in other countries and make it look as though it happened in this country”.

"As we go into the 2020 election, the view of the NMC is that this kind of technology will enable us to do reverse analysis to say that this did not happen in Ghana," Mr Sarpong added.

Addressing a follow-up question from the Ningo-Prampram MP on whether the NMC was clothed with the mandate to monitor new media platforms, Mr Sarpong said the commission had the legal mandate to regulate all mass communication media.

The NMC Executive Secretary added that "to the extent that we describe most of these media as new media, it means that they are mass media because by calling it new media, we tend to agree that it is media, except that it is new in evolution."

"I take it that our mandate as a commission covers that and I’m open to debate with anybody who holds an alternative view,” Mr Sarpong stressed.

Regarding infractions against the NMC, the Auditor-General's report indicated that the commission had failed to lodge GH¢21,650 into the bank account within 24 hours as required by law.

Among other infractions, the commission was indicted for issuing money to some staff without corresponding signatures covering them.

Mr Sarpong admitted those infractions, but said they had since been corrected.

When the National Population Council (NPC) took its turn at the PAC sitting, its Executive Director, Dr Leticia Appiah, called for support from the government and other partners to make the council deliver on its mandate.

She said prioritising population issues was key since robust population management was critical for national development.

Dr Appiah said population was not just about the number of people in the country but also included the structure of the population.

"You cannot develop adequately if you do not have a hand on your population," she said.

Among other infractions, the NPC was cited for payments to directors and managers without withholding taxes.