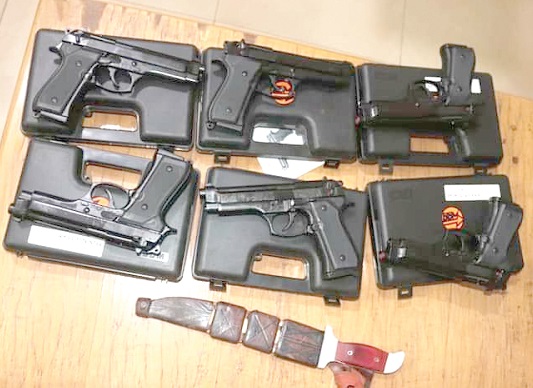 Some of the firearms retrieved by the police Follow @Graphicgh

The plea of the accused, Mohammed Issah alias "waters", was not taken and he is to reappear on April 25.

Prosecuting, the Northern Regional Chief State Attorney, Salia Abdul-Quddus, prayed the court to remand the accused in police custody to enable him to assist with further investigations.

However, counsel for the accused, Ibrahim Yussif, prayed for bail but the bail application was dismissed by the court.

The facts, as presented before the court, are that on Thursday, April 8, this year the suspect was arrested at a snap check point at Pigu on the Tamale-Bolgatanga Highway during a routine police intelligence operations.

He was believed to have smuggled the arms from Togo through Cinkasse and on his way to the regional capital, Tamale.

The police conducted a search in the vehicle and retrieved six 9mm Calibre Bruni pistols which were concealed in a package he covered with a smock.

Police also retrieved one dagger in his possession

Meanwhile, the Police Administration, in a statement, commended the Northern Regional Police Command, especially the team that was involved in this operation, for their diligence.

While assuring the public of its resolve to ensure a safe and secure environment for all, the police have urged the public to continue to assist them with leads to enable them to fight crimes.