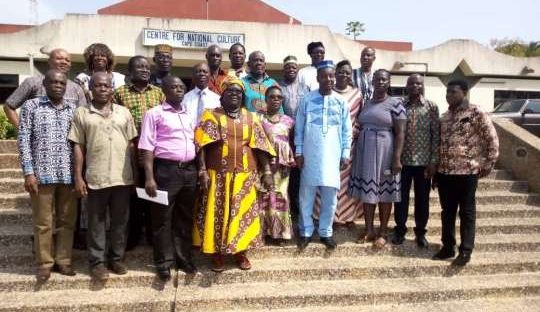 show participants at the conference in a group picture.
30.5k Shares

Directors and accountants of the various regional Centres for National Culture (CNC) have called on the government to reverse the National Commission on Culture (NCC) to its autonomous status.

They noted that the situation where the NCC had been made a mere appendage to various ministries over the years had affected the operations of the commission and its allied institutions, including the CNCs and hindered their effective operations.

In a communiqué issued at the end of a conference of regional directors and accountants of the CNCs after a meeting in Cape Coast to the President Nana Addo Dankwa Akufo Addo, said the autonomy status was necessary to ensure efficiency and promote the nation’s cultural values.

The conference was held on the theme “Contemporary Administration of Ghana’s Culture, CNC in Perspective.”

Other institutions under the NCC include the WEB Du Bois Memorial Centre for Pan African Culture, the Kwame Nkrumah Memorial Park, the headquarters of the Pan African Writers Association and the Bureau of Ghana Languages.


The communiqué noted that making the NCC and its institutions appendages had not produced any meaningful results for the cultural sector.

“The only viable imprint was when the sector was made an independent autonomous commission,” it stated.

The communiqué indicated that the CNCs still had weak infrastructure some in bad state while revenue from the centres to maintain these facilities was woefully inadequate.

The conference in its communiqué therefore called for a 100 percent retention of the Internally Generated Funds to help adequately maintain their facilities and to effectively promote their activities.

It said the centres were public service, providing institutions and were generally income generating organization with weak infrastructure whose internally generated funds levels were basically used to service their facilities.

The communiqué further called for the reactivation of the Culture Trust Fund to help raise funds for the operations of the CNCs.

The communiqué also expressed worry at some noted attempts to release the CNCs on to private operators on Built operate and transfer basis, saying the CNCs were national heritage which must not be sold out or handed over to a private individual adding that and collaboration should be on public private partnership basis.