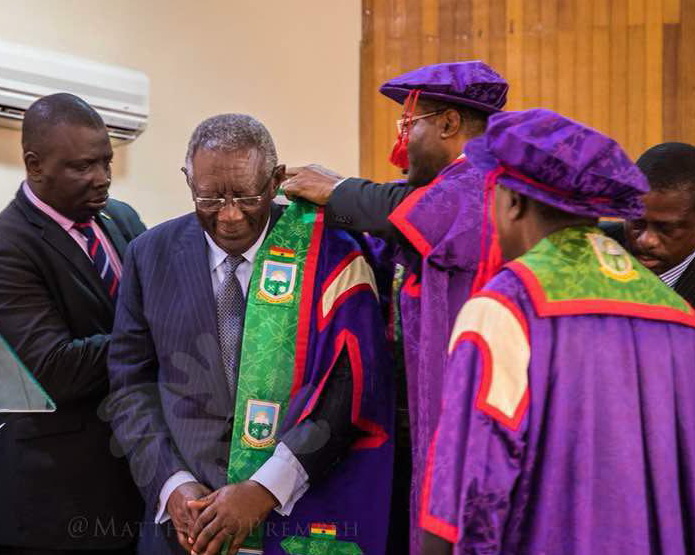 Former President Kufuor being decorated after his investiture Follow @Graphicgh

Former President John Agyekum Kufuor has taken office as the first Chancellor of the University of Mines and Technology Tarkwa (UMaT).

At the investiture in Tarkwa over the weekend, the President, Nana Addo Dankwa Akufo-Addo, described the decision by UMaT to appoint former President Kufuor its first Chancellor as a step in the right direction.

The President said the appointment was appropriate, since it was the former President who was responsible for ensuring that the Western University College of the Kwame Nkrumah University of Science and Technology (KNUST), through Presidential Assent on November 12, 2004, became the UMaT.

“It is a well-deserved honour, given in recognition of the immense work you did during your time as President of the Republic, not only for UMaT but also for Mother Ghana. I commend the authorities of the university for this admirable gesture,” he said.

He also commended the university for the important role it was playing in producing industry-oriented graduates in engineering. 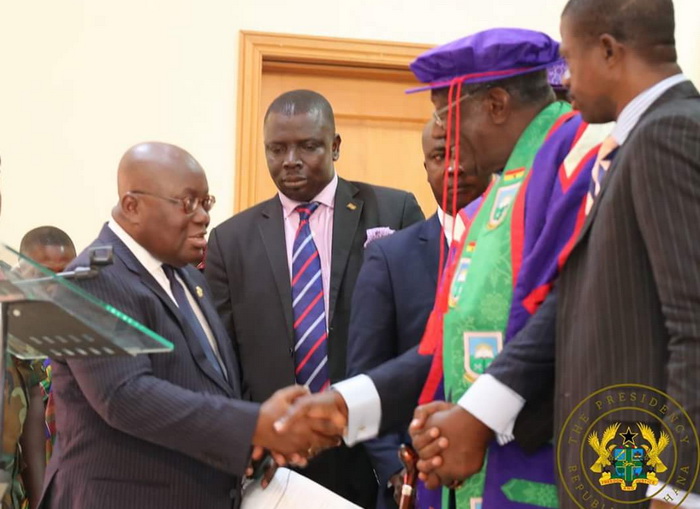 President Akufo-Addo said through its research into the country’s rich mineral resources and years of history of mineral exploitation, the university was in a strategic position to become a global leader in mining and allied industries.

He commended the university for training 400 small-scale miners, as well as for its readiness to accept an additional 1,000 for training this year, saying that the measure would go a long way in contributing positively to the fight against illegal mining.

Also commendable, he said, was the university’s development and manufacture of ‘Sika Bukyia’, a direct smelting kit for the recovery of gold without the use of mercury and other dangerous chemicals injurious to the environment and users.

He said the government, through the Ministry of Lands and Natural Resources, intended to facilitate the manufacture and sale of ‘Sika Bukyia’ to all licensed small-scale miners.

President Akufo-Addo said the government, through the Ghana Integrated Bauxite and Aluminium Development Authority, was determined to exploit the country’s bauxite and iron ore deposits and as such it was delighted with progress made with a novel technology that was being promoted by the UMaT, which involved the use of plastic waste to upgrade bauxite ore to yield 90 per cent alumina, as against the present system that gave yields of 40 to 45 per cent.

“With the use of this technology, the value of the ore will increase ten-fold. The research work being undertaken here is invaluable and will assist greatly in our nation’s quest to transform our economy from a raw material producing and exporting one to a value-added industrialised economy,” he said. 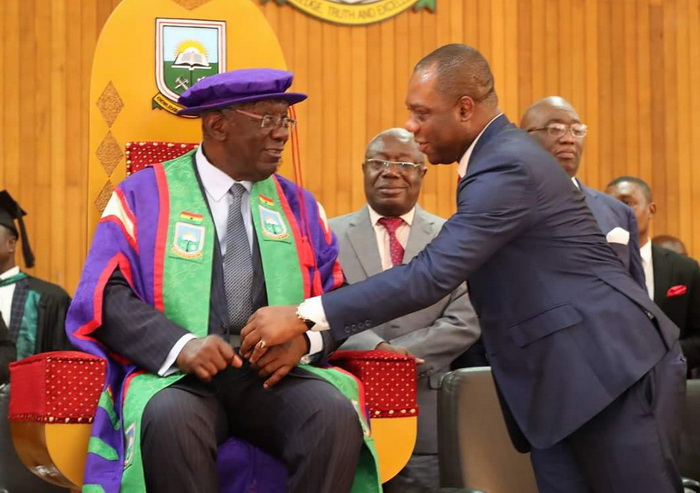 The President congratulated the UMaT Vice-Chancellor and his team on sticking to UMaT’s core mandate of engineering education to complement efforts to advance the national policy of achieving 60 to 40 per cent student ratio for the sciences,  compared to the humanities, through the promotion of science, technology, engineering and mathematics (STEM) education.

“I wish to assure you that the Akufo-Addo government will insist that the process of equipping UMaT with the requisite logistics, involving the rehabilitation and equipping of existing laboratories and the construction of new buildings, that is currently ongoing, will be systematically pursued to enable it to deliver effectively on its mandate of teaching, research and service to the community,” he said.

President Akufo-Addo congratulated the University Council of UMaT on its decision, in accordance with the statutes of the university, to rename the institution after George Alfred Grant, the legendary Axim-born entrepreneur, ‘Paa Grant’.

“It is a most excellent decision, which has received the agreement of the President of the Republic, so that, once the parliamentary process has been completed, this university will be called the George Grant University of Mines and Technology, Tarkwa,” he said.

The President explained that it was wholly fitting that “this great, modest man, who can lay legitimate claim to being the father of modern Ghanaian nationalism, should be properly honoured by a grateful posterity, i.e. by us who are the heirs and beneficiaries of the freedom he so valiantly fought for, especially by citizens of his native Western Region.”

Following the donation of 26 square kilometres of land to the university by the Wassa Fiase Traditional Council for the construction of a 20,000 capacity campus, President Akufo-Addo announced that “the government will give an annual special budgetary allocation of GH¢5 million to the university towards the realisation of the project”.

For his part, former President Kufuor described his investiture as memorable and a great honour for him as the first Chancellor of the UMaT.

“There is, indeed, a special history between this university and me. It was under my watch as President that this institution, which was originally the Western University College of KNUST, attained the status of a fully-fledged university,” he said. 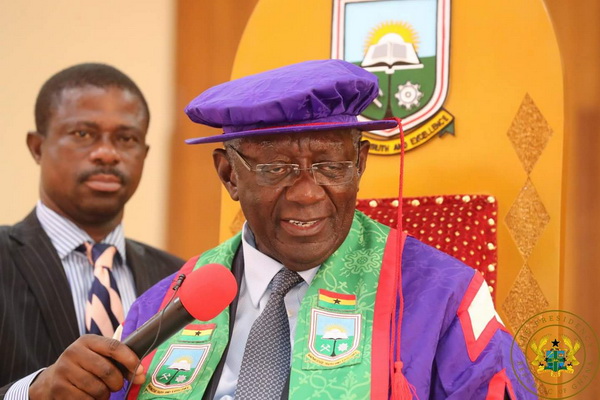 He recalled that the task of transiting to become a fully fledged university rested squarely on the shoulders of the then Minister of State in charge of Tertiary Education, Ms Elizabeth Ohene.

“I did not conceive that some years down the line I will be standing here before this august assembly to be inducted into office as the university’s first Chancellor. I feel proud and honoured,” he said.

The former President said he was particularly connected to the university because of its notable core competency areas — mining and technology.

He reminded the university that mining remained a major component of the extractive industry and had historically been a key contributor to the Gross Domestic Product (GDP) of many countries that were lucky to have been endowed with natural resources.

“The prudent and efficient management of the mining sector, therefore, is very critical to the sustainable development of the economy.

“Attendant to this also are the obvious negative environmental impacts of mining activities which, if not managed well, can have severe consequences on the people and the nation. Needless to say, it takes sound research, knowledge dissemination and training of personnel to ensure that optimal extraction of mineral resources in an environmentally friendly manner is attained,” he said

In that respect, Mr Kufuor urged authorities at the national level to institute and enforce a framework to ensure that the mining sector operated with a high degree of conscience for the well-being of society generally and more particularly the immediate communities in areas where mines operated.

The former President noted that the future currently belonged to economies that took technology and innovation seriously and made the conscious effort to train manpower in those competencies.

“That is why science, technology, engineering and mathematics education should be the cornerstone of the educational curricula of any serious nation that seeks to develop industrially.

“The university, therefore, having chosen to be committed to this all-important academic enterprise, with its accompanying practical experiences, is worthy of commendation and support from the government,” he said.

He envisaged a future in which the UMaT would fast become the centre by an industry-driven transformational economic take-off and become the cornerstone of the government’s development policies.

He urged the university to assist the government with the appropriate technologies and know-how, as well as recommendations that would permanently arrest menacing challenges to the country and those who sought their livelihoods from mining.

He called on the UMaT to also direct its effort at assisting the government to “structure the small-scale mining industry, so that its activities can take place within guidelines set up under appropriate regulations”.

“Such an endeavour should enable small-scale miners to work and earn their livelihoods in a regulated, secure and lawful environment,” he said.

He said in 2013, the UMaT signed a pact with the Ghana National Association of Small-Scale Miners (GNASSM) to train its members in environmentally safe methods of mining.

Prof. Kuma said the university was tasked to train small-scale miners, a project which it began last year with an initial amount of GH¢500,000.

He said the UMaT trained 400 small-scale miners and “we have been informed that we will be training 1,000 more this year”.

He said the first batch of 100 trainees completed their training last Thursday and commended the ministries of Environment, Science, Technology and Innovation and Lands and Natural Resources for the confidence reposed in the university.