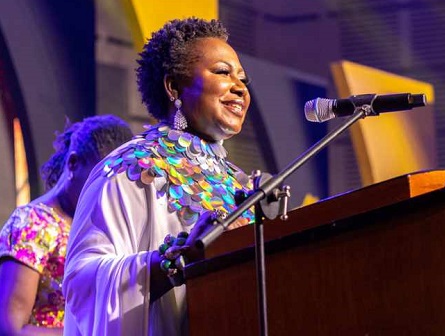 Ace Broadcaster and Host of the Standpoint show, Oheneyere Gifty Anti has advised the youth, particularly, women to prioritise their education in order to attain greater heights in life.

She said this will go a long way to change the narrative and give women the confidence to explore and excel in any chosen fields.

“As a young lady, you must have dignity and eschew acts that will dent your reputation in years to come. I stand for feminism and forever a feminist” she noted.

Oheneyere Gifty Anti was speaking during the 2021 National Communications Awards organised in Accra. She received the Media Women Empowerment Award at the event.

The National Communications Awards is aimed at highlighting the importance of communications as a tool for development.

It was instituted by RAD Communications Limited, the awards is focused on celebrating and rewarding excellence among companies, teams and individuals.

Ms Anti said there was the need for media practitioners to intensify advocacy on women Empowerment and reduce the usual politics, sports and entertainment often prioritised in the media.

“There shouldn't be any discrimination against women at home, school and the workplace. Imagine bullying someone because she is female. It doesn't speak well of us as a society hence a pragmatic approach needed to contain this development. "Women are intelligent, smart and above industrious like their male counterparts. No need for discrimination of any form" she said.

Also, a Student of the Ghana Institute of Journalism (GIJ), Stephen Bernard Donkor also won the Outstanding Student Journalist of the Year at the event.

"I am particularly thankful to God for this honour done me. I dedicate the award to Mr. John Wesley Bessey, Mr. Ernest Asante Wiafe, Mr. Philip Donkor, Mrs. Margaret Oppong Donkor, Mrs. Patricia Amoafo Wiafe and Amanda Atunah for their contribution towards my success story. Also, Mandy, my brother Bright Philip Donkor and Kimberly Atunah for their support. This is certainly a win for the Ghana Institute of Journalism,” Mr. Donkor said after receiving his awards.