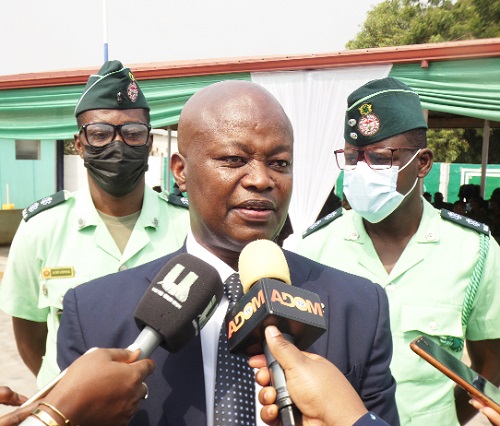 The Chief Executive Officer (CEO) of the National Ambulance Service, Professor Ahmed Nuhu Zakariah, has appealed to heads of security agencies to include emergency medical service in the training curricula for staff.

He said such training for staff of the security agencies would not only help augment the efforts of the service to provide emergency response services to victims but would also help in reducing casualties and mortalities in dire situations.

“Research has shown that where we have enough emergency medical service system, casualties and mortalities are brought to the lowest minimum,” Prof. Zakariah said at a training session for the third batch of students drawn from different units of the Ghana Armed Forces (GAF) in Accra yesterday.

The programme is to ensure that the soldiers can administer immediate life-saving procedures under emergency circumstances.

The training is a collaboration between the GAF and the National Ambulance Service, and has trained 140 staff of the military to become Emergency Medical Technicians (EMTs) since its inception in October 2013.

They provide basic and advanced life support to patients in the pre-hospital emergency setting.

Their services, among others, include the establishment and maintenance of airway, administration of cardiopulmonary resuscitation (CPR), control of haemorrhage, treatment of shock and immobilisation of fractures, bandaging of wounds and assisting in childbirth.

After a successful completion of the two-year programme, the EMTs of the military are deployed to discharge their duties in their various units and also serve during combat.

The third batch is made up of 73 students drawn from various units of the Ghana Armed Forces.

Prof. Zakariah explained that a robust medical support system in the military would be crucial, saying it provided confidence and upheld the morale for soldiers and the public.

“When a physician is not available, medical emergency technicians provide basic and emergency medical treatment, and they also assist medical officers in caring for the sick and the injured, hence the need to have some of the military staff trained as EMTs,” he added.

He said the skills acquired would help them to take better care of the country’s soldiers and civilians.

The training, he said, would go a long way to add more hands to the workforce and to enhance the work of the health personnel who were always overwhelmed in situations such as industrial actions.

The Commanding Officer of the 37 Military Hospital, Brigadier General Nii Obodai, urged the soldiers to take their studies seriously.

He added that the role of the EMTs in efficient healthcare provision had increased in recent times, hence the need for the GAF to train its own emergency technicians.

The programme, he said, had attracted the interest of both the military and civilians after individuals had seen the impact and knowledge of the training from graduates of the previous batches.

Brigadier General Obodai stated that the GAF would ensure the smooth running of the course to boost the health delivery mandate of the country in spite of logistical challenges.

He congratulated the beneficiary personnel and urged them to put up their best in the training.