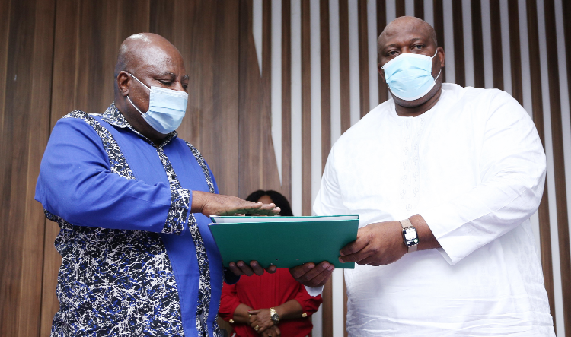 Mr. Ashitey highlighted various programmes and initiatives being undertaken in the region and also spoke about his achievements and the challenges his administration faced.

“We are here to hand over work done over the last four years to you and your team to continue from where we left off,” he said.

He urged the directors and staff at the Greater Accra Regional Coordinating Council (GARCC) to support his successor in his work.

Mr. Ashitey also encouraged the new minister to have confidence in the staff at the regional administration office, who he described as hardworking.

Mr. Quartey thanked the President for reposing confidence in him and also expressed gratitude to the former minister for his support.

He urged Mr. Ashitey to put his knowledge and expertise at the disposal of the new administration so that the objective of developing the region further could be achieved swiftly.

He stated that his administration intended to launch a project dubbed: “Let’s make Accra work” in a matter of two weeks to tackle issues on security in the region.

“There’s work to be done and we cannot waste time. We’ll also jump on to the issues of sanitation, abuse of siren, education, jobs and security quickly,” he said.

Commitment
The regional minister pledged to continue with the good works of his predecessor and urged the metropolitan, municipal and district assemblies (MMDAs) to cooperate with him to develop the region.

He advised the MMDAs to continue with their struggle against the COVID-19 disease, adding that he would meet with them soon to develop a plan to fight the disease together.

He expressed concern over the reduction of teaching time for Ga in basic schools in the Greater Accra Region and said he would lobby the Ministry of Education to increase instruction time for the language in the schools.

Mr. Quartey appealed to traditional leaders in the region to desist from multiple sale of lands in order to bring the issue of land guards to the barest minimum.

Promise to work together

The Municipal Chief Executive (MCE) of the Adentan Municipal Assembly, Mr. Alexander Nii-Noi Adumuah, who spoke on behalf of the MMDAs in the region, welcomed the new regional minister and promised to cooperate with him.

The ceremony was attended by a former Deputy Greater Accra Regional Minister, Mrs. Elizabeth Sackey; the Regional Chairman of the New Patriotic Party, Mr. Divine Agorhom, and other party stalwarts.