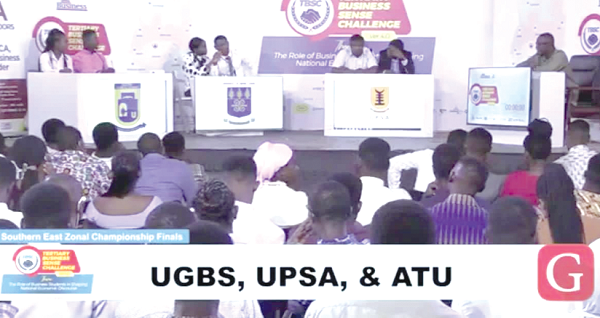 The University of Ghana (UG), Legon, has emerged winner of the SouthEast Zonal championship of the Version 4.0 of the Graphic Tertiary Business Sense Challenge (TBSC).

The premier university beat the University of Professional Studies Accra (UPSA) and the Accra Technical University (ATU) in what looked like a one-sided competition.

In the end, UG won with a total of 74 points. UPSA followed with 40 points while ATU scored 13 points.

However, all three schools have made their way to the quarterfinals of the national championship of the TBSC to be held next week.

The Northern zone was won by the Kwame Nkrumah University of Science and Technology (KNUST) last week.

UG led the contest in the first round with 11 points followed by UPSA with nine points while ATU managed just a point.

In round two, UG maintained its position by earning the highest score: 26 points, followed by UPSA and ATU which scored eight and zero points respectively.
UG in round three scored eight points; UPSA, seven points, and ATU, two points.

UG took the lead position in round four with 14 points, ATU came second with nine points while UPSA followed with seven points.

In the final round, UG scored five points; UPSA, three points, and ATU 0, a development which won UG the title for the zone.

The Version Four of the TBSC is on the theme: The Role of Business Students in Shaping National Economic Discourse”.

It is also meant to enable students to keep abreast of the developments within the business industry and the economy as a whole, so they can make informed decisions in the near future.

Technical support for the competition is being provided by the Chartered Institute of Marketing, CIMA with media support from the Daily Graphic, GraphicOnline, TV3, Connect FM.