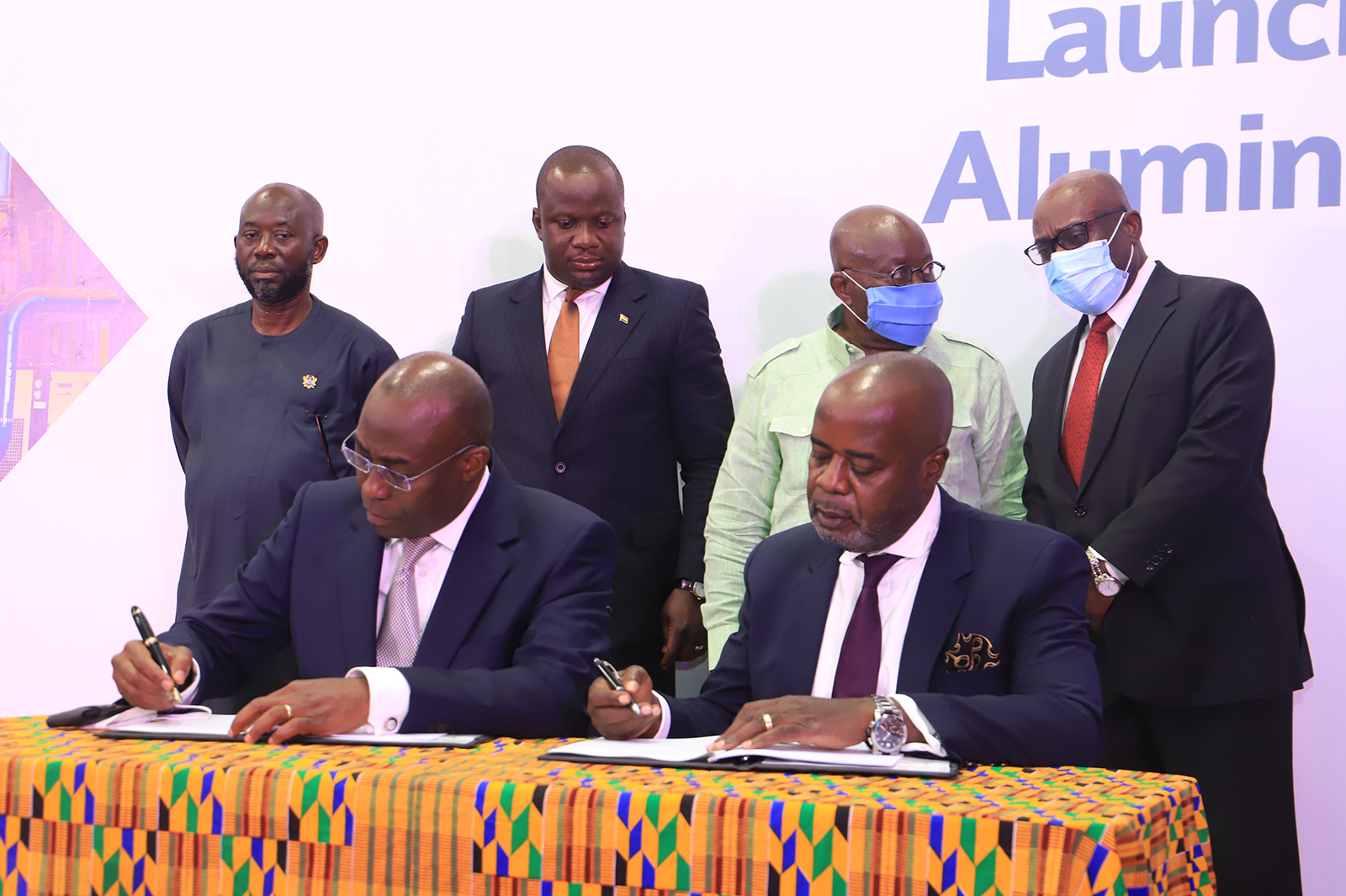 GIADEC successfully selected Rocksure International as its strategic partner to develop one of four projects being executed under the IAI value chain.

President Akufo-Addo who witnessed the signing of the agreements between the two parties at a brief event held in Accra said that the IAI remains an integral part of his government’s industrialization agenda.

He stressed that his government would ensure the implementation of the IAI, which would involve mining, refining and smelting are carried out in a responsible manner.

President Akufo-Addo, who also launched GIADEC’s four-project agenda for the Integrated Aluminium Industry, further commended the Corporation for working assiduously to select Rocksure International as its partner after a transparent, competitive and rigorous investor engagement process.

He said that his government will continue to create the enabling environment needed to attract more investors to venture into the industry.

President Akufo-Addo was particularly excited that Rocksure International is a wholly-owned Ghanaian company and stressed that the decision further demonstrates his commitment to the promotion of local content and local participation.

The Minister of Lands and Natural Resources Mr. Samuel Abu Jinapor speaking at the event pledged the support of the Ministry in ensuring that government’s vision of a fully operational and globally competitive IAI is realized.

The Chief Executive Officer of the Ghana Integrated Aluminium Development Corporation, Mr. Michael Ansah for his part emphasized that the agreement would culminate in a joint venture partnership between GIADEC and its new partner Rocksure International to build a mine at Nyinahin-Mpasaaso and a refinery solution.

The project, also referred to as Project 2, according to him is one of the four (4) projects GIADEC is currently executing.

Mr. Ansah stressed that Rocksure International will, first, undertake a Mineral Resource Estimate (MRE) to validate and define the bauxite reserves leading to the construction of a mine and a refinery solution.

According to him, the lifetime of the mine is estimated to span over six decades and create over 1,000 direct and indirect jobs.

He reiterated that the four projects will be private sector-led and will be executed in partnership with key strategic investors and will require a six-billion-dollar investment.

The real impact of an Integrated Aluminium Industry, will be felt at the downstream sector where demand for aluminium and aluminium related products are expected to rise especially with the establishment of various car manufacturing plants in the country.

This value-addition drive will not only result in a thriving local economy but will significantly cut down on the importation of aluminium and aluminium products, he added.

Also, present at the event were Members of Parliament for the proposed mining areas and representatives of some government institutions, board members of GIADEC, traditional leaders from communities where the mines and refineries will be situated and other stakeholders.

GIADEC is a state-owned company responsible for the development of an integrated aluminium industry in Ghana. The company’s portfolio of assets includes mining rights to all of Ghana’s 900 million tonnes of bauxite reserves, 100% shares in Valco - Ghana’s smelting company and interest in Ghana Bauxite Company Limited, a producing mine that has been operating for over 70 years.

Through strategic partnerships, GIADEC, will hold equity stakes in new mines and refineries to be established, and drive integration of the bauxite – aluminium value chain to create value.

GIADEC is guided by its core values of Integrity, Respect and Execution excellence. The company believes in shared prosperity, sustainability and adherence to responsible environmental and operational practices.

Rocksure recognises that local content is an important platform for economic development and strives to engage key stakeholders to deliver developmental partnerships in the areas that it operates in. Health and environmental considerations and resultant policies are key considerations for the company carefully mapped out and are implemented to ensure a sustainable and safe environment for all.

Additional information about Rocksure can be found at www.rocksureintl.com.