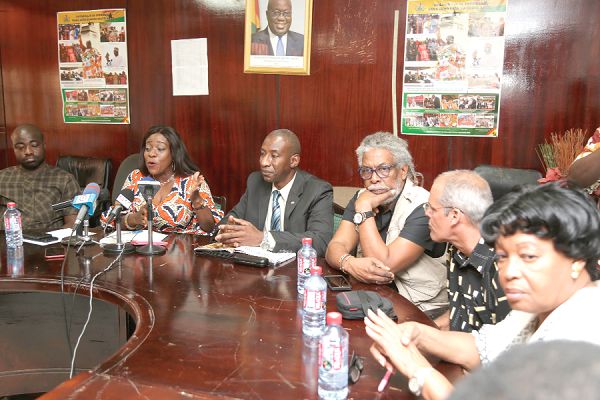 A four-member Cuban delegation from the African Cultural Centre in Cuba has held discussions with the Minister of Tourism, Creative Arts and Culture, Mrs Cathrine Afeku, in furtherance of a collaboration between Ghana and Cuba on the upcoming “Year of Return 2019” programme to be hosted in Ghana.

The delegation was led by the Cuban Ambassador to Ghana, Mr Pedro Luis González Despaign.

During the delegation’s courtesy call on Mrs Afeku at her office in Accra last Friday, she said the group was in Ghana to share knowledge and skills with its Ghanaian counterparts in respect of the programme.

She said Ghana would host more than 500,000 diasporans in the celebration of the event that is to commemorate 400 years of the first docking of a ship that carried Africans into slavery in the Americas.

The tourism minster told the delegation that since President Nana Addo Dankwa Akufo-Addo officially proclaimed 2019 as the ‘Year of Return’ for all diasporan descendants of Africans who were captured and transported into the Americas as slaves in the 17th and 18th centuries, a lot of people had shown interest in returning to Africa.

Mrs Afeku explained that the ‘Year of Return' sought to make Ghana the focus for millions of African descendants reacting to their marginalisation by tracing their ancestry and identity and by this Ghana would become the beacon for African people living on the continent and the diaspora.

“The proclamation recognises Ghana’s unique position as the location for 75 per cent of the slave dungeons built on the West coast of Africa and the President’s policy to make it a national priority to extend a hand of welcome back home to Africans in the diaspora,” she said.

For his part, the Cuban Ambassador said the year of return was very important to Cubans because during the slave trade era, over one million Africans ended up in Cuba and their dependants played a very significant role in the independence struggle of Cuba.

He said after visiting the Cape Coast and Elmina castles, the group had realised that their ancestors were strong and brave, having made the journey to their destinations in view of the inhuman treatment that was meted out to them.

Mr Gonzalez noted that culture was a very important aspect of the celebration and that the Cuban sculptor who had erected bronze busts in some areas in Cuba expected to work with Ghanaian artists to build some huge monuments in Accra.

The “Year of Return” took inspiration from the Joseph Project and leaders such as Dr Kwame Nkrumah, Mr George Padmore and Dr W.E.B. Du Bois who led and gave foundation to Pan Africanism with series of activities, actions and interactions spearheaded by Ghana.

The year-long event is expected to bring about 350,000 people from North America and 150,000 from the Caribbean and Latin America to Ghana.