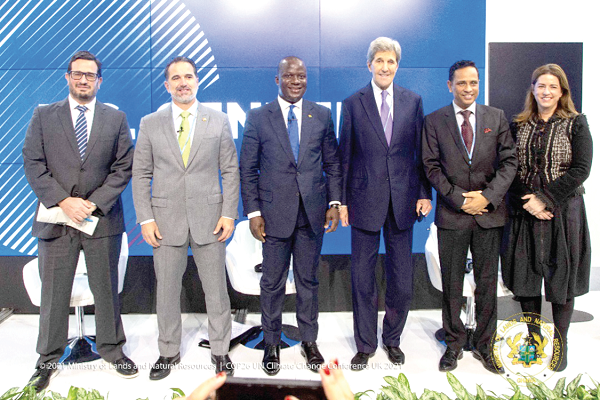 Mr Abu Jinapor (3rd from left), Minister of Lands and Natural Resources, with Mr John Kerry (3rd from right), former Secretary of State and US Special Presidential Envoy for Climate Change, and other dignitaries Follow @Graphicgh

The government is to access part of a $1-billion fund mobilised by a US-based coalition to support actions to reduce emissions from deforestation.

This follows the signing of a Letter of Intent (LOI) between the Ministry of Lands and Natural Resources and the Lowering Emissions by Accelerating Forest Finance (LEAF) Coalition, through Emergent, a US-based non-governmental organisation.

The LOI marks a major step towards accessing part of the $1 billion being mobilised by the coalition to support tropical and subtropical jurisdictions to make a substantial reduction in their emissions from deforestation.

It will also enable both sides to start negotiations on an agreement to provide financing to fight climate change through forest protection and reforestation.

In April this year, the governments of the United Kingdom, the United States and Norway, together with some leading global companies, launched LEAF as a voluntary global coalition to bring together companies and governments to provide finance for tropical and subtropical forest conservation.

Following “Call for Proposals”, in which 30 countries participated after the initial technical screen by a panel of experts, Ghana, Nepal and Ecuador were selected to sign the LOI with the coalition as a major step towards signing a binding Emission Reduction Purchase Agreement to access the funds.

The Minister of Lands and Natural Resources, Mr Samuel Abu Jinapor, is leading a delegation at the ongoing Conference of Parties (COP 26) in Glasgow, Scotland to discuss forests, land use and nature-based solutions to climate change.

At the signing of the LOI on the sidelines of the ongoing 26th session of the COP 26 of the UN Framework Convention on Climate Change (UNFCCC) last Wednesday, Mr Jinapor underscored the importance of forests and other nature-based solutions to the fight against climate change.

He said the protection of tropical and subtropical forests was crucial to reducing greenhouse gas emissions to meet the 1.5 degree Celsius target.

He commended the members of the LEAF Coalition for the initiative and pledged the commitment of the government to work with the coalition and other stakeholders to come to grips with climate crisis.

Speaking later at an event dubbed: “Beyond the Talk”, held at the Ghana Pavilion at the COP 26 to showcase the country’s forest sector climate solutions, Mr Jinapor bemoaned the alarming rate at which the forest was being depleted and called on world leaders to go “beyond the talk” and act to halt climate change.

According to him, the world was not doing enough beyond the talks, resolutions and commitments and said there was the need for world leaders to demonstrate real and measurable actions for the 1.5 degree Celsius target to guarantee a sustainable future for the planet.

He also participated in a panel discussion on the Cocoa and Forest Initiative (CFI), during which he highlighted some of the achievements of the CFI as setting a floor price for cocoa to ensure that farmers got value for their produce and the introduction of the living income differential and its contribution to halting deforestation and climate change.

Mr Jinapor, however, said that must be done with integrity, since the carbon market was not an absolute substitute for emission reduction strategies.

He further pledged Ghana’s support to the VCMI “to provide the benchmark for transparency, accountability, inclusiveness and permanency in voluntary carbon market transactions”.