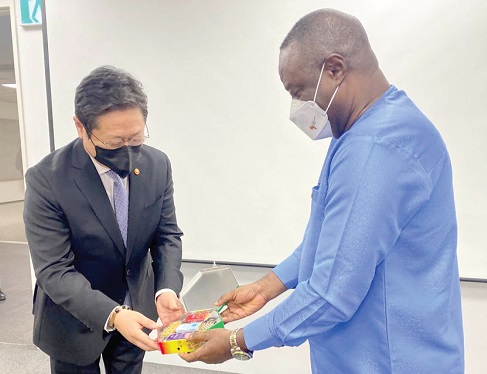 Ghana and South Korea have underscored the need to collaborate and seize the opportunity to deepen their cultural and tourism ties.

Despite the disruption caused by the COVID-19 pandemic, both countries still consider the need to tap into their comparative advantage and reserves to forge closer collaboration in tourism, sports, and culture.

This was the outcome of a bilateral meeting held between the Minister of Tourism, Arts and Culture, Dr Ibrahim Mohammed Awal, and the Minister for Culture, Sports and Tourism of South Korea, M. Hwang Hee, in Seoul at the weekend.

Mr Hee expressed the need for South Korea and Ghana to intensify their relationship more in the tourism, sports, and culture space.

According to him, 60 per cent of South Koreans went abroad every year for tourism purposes, hence the need for both countries to deepen tourism ties by taking advantage of such opportunities.

He said Koreans were deliberately trained to go abroad to learn other cultures and Ghana had some unique cultures, traditions that would be of importance to the people of Korea and vice versa.

For his part, Dr Awal noted that Ghana had a unique and rich culture that would excite people from South Korea.

He said Ghana prided itself on its rich culture that depicted the lifestyles of both traditional and ethnic groups.

He adding that the country had about 32 Forts and Castles which were a unique selling proposition.

According to Dr Awal, there was the need for Ghana and South Korea to come up with a deliberate programme to promote both countries tourism and cultural heritage.