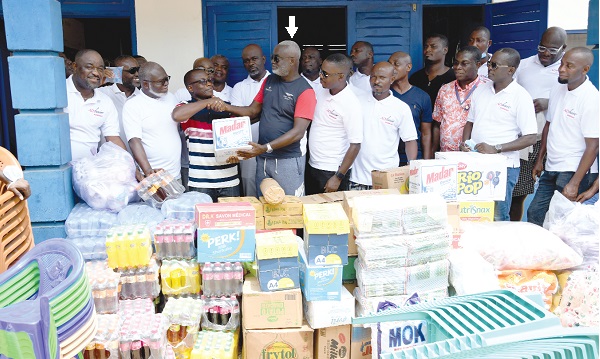 Mr Kwabena Osei Bonsu (arrowed), General Secretary of the ADXCLUSIVE Club presenting the items to Mr Frederick Amedzake, Headmaster of the Castle Road Special School. With them are some members of the Club Follow @Graphicgh

Members of ADxclusive Club, a benevolent association based at Adabraka in Accra have donated a number of items worth GH¢25,000 and cash of GH¢ 2,000 to the Castle Road Special School located within the Accra Psychiatric Hospital at a ceremony in Accra.

The donation, which was in response to a request by the school for assistance, involved stationery, food items, toiletries, assorted drinks and bottled water, bales of unused and used clothes, plastic chairs and tables and cartons of disinfectants.

The General Secretary of the club, Mr Kwabena Osei Bonsu, who presented the items said, the donation formed part of the 65th anniversary celebrations of Ghana’s independence.

He said it had also been one of the objectives of the club to extend benevolence to the less privileged in society.

“Some of the things the club has been doing over the past 20 years since its formation is to pay school fees for brilliant school children who are unable to fund their education and sponsoring free health care for the people of the Adabraka community where the club has its headquarters,” he said.

Mr Osei Bonsu appealed to the management of the school not to hesitate to contact the club for their needs stressing that “ we are always ready to assist them.”

Receiving the items, the headmaster of the school, Mr Frederick Kudjo Amedzake, expressed joy about the donation and the quick response to their request which according to him had arrived at an appropriate time when the school was in dire need of them.

He said he could not remember the last time the school took delivery of such items ever since he became the headmaster of the school.

The school which was established to train students with intellectual and development disabilities has a population of 36, made up of 26 boys and 10 girls with the age ranging from 15 and 40.

Mr Amedzake said due to lack of boarding facilities and their condition the students were unable to come to school every day and therefore, appealed to the government to provide the school with boarding facilities so they would be able to monitor and take good care of them.

He thanked the donors for the kind gesture and called for support from individuals and other benevolent associations.