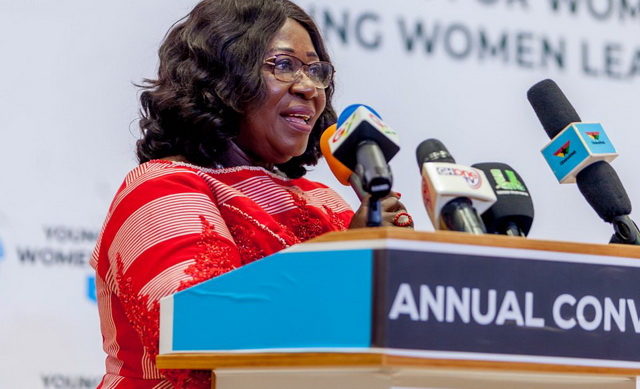 Ghana is implementing innovative measures to meet all the Sustainable Development Goals (SDGs), the Chief of Staff, Akosua Frema Osei-Opare, has said.

To achieve the goals, she said, the country needed an average of $45 billion a year until 2030.

In addition, she said, there was the need to ensure macroeconomic stability and the appropriate governance regime for sustainable human development.

Mrs Osei-Opare said this when she presented a paper on: “Our World at a Triple Tipping Point: The Urgency of SDGs Action”, on the second day of the Ho Edition of the SDGs Day Out at the Ho Technical University (HTU) last Tuesday..

The three-day event, which took off last Monday, was on the theme: “Leave No One Behind”. 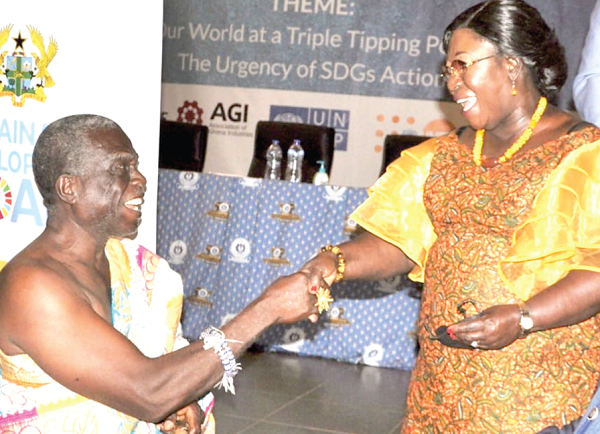 Akosua Frema Osei-Opare in a hearty exchange of greetings with Togbe Adza Osei VI, the Paramount Chief of the Akoviefe Traditional Area

The Chief of Staff said while vigorous efforts were being made to repair the damage done by the COVID-19 pandemic,Ghana and the world at large were confronted with the stark reality of the dangerous condition of the earth, as reflected in the unprecedented changes in climatic conditions and ocean health.

She said variability in rainfall patterns; drought and high temperatures posed a real risk to agricultural productivity and a threat to agri-business industrialisation drive.

She noted that the large number of Ghanaians whose livelihood activities were directly linked to nature-based resources were highly vulnerable to the effects of climate change.

“Sea level rise and tidal surge resulting from climate change pose existential threats to coastal settlements and ecosystems, as recently experienced in Keta and neighbouring settlements in the Volta Region.

“With many of our critical infrastructure, such as oil and gas plants, thermal power generation, major highways and ports, as well as settlements and monuments, dotted along the coast, the potential economic and social cost of coastal erosion and tidal surge could be enormous,” she added.

To reverse that trend, Mrs Osei-Opare stressed the need for decisive actions now to safeguard the ocean’s capacity to regenerate and continue to deliver substantial economic, environmental and social value for human development.

As a member of the High-Level Panel for a Sustainable Ocean Economy, she said, Ghana was committed to sustainably managing 100 per cent of its ocean.

Pursuant to that, work would start shortly on the preparation of a Sustainable Ocean Plan for the country, she announced.

Mrs Osei-Opare called on all stakeholders to actively get involved in the process and ensure its successful implementation.

She maintained that investing now in a sustainable ocean economy would definitely improve the lives and prospects of everyone everywhere in the country, since the ocean provided many of the solutions for the sustainable development challenges facing the nation and all mankind.

The Presidential Advisor on SDGs, Dr Eugene Owusu, said the goals sought protection for the planet, the creation of prosperity, among other development goals, and must, therefore, be seen as an opportunity for better living conditions for all.

The realisation of the SDGs, therefore, required a strong partnership between the government, on the one hand, and civil society, the private sector, traditional rulers and academia, on the other, he said.

The Vice-Chancellor of the HTU, Professor Ben Q. Honyenuga, said the ravages of COVID-19 provided an opportunity for the nation to rebuild.

He said the HTU was collaborating with the SDG Unit at the Presidency towards the achievement of the SDGs.