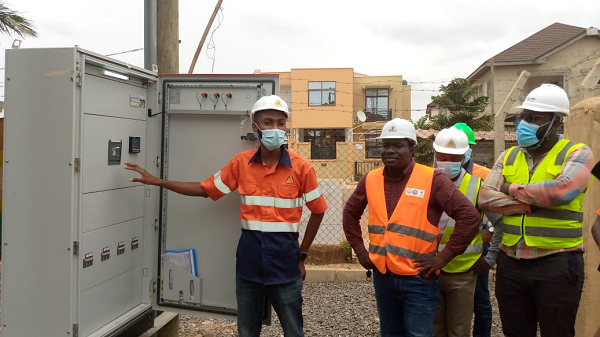 The Millennium Development Authority (MiDA) has installed 360 power distribution transformers to upgrade the low voltage network of the Electricity Company of Ghana (ECG).

The 360 transformers are part of 393 to be installed in six districts of the ECG’s Greater Accra Regional Area.

In all, residents of 53 towns and communities in the Achimota, Dansoman, Akuapim-Mampong, Legon, Kwabenya and Kaneshie ECG districts will experience improved power quality and a reduction in outages.

The $31-million Low Voltage (LV) Network Improvement Project, referred to as the LV Bifurcation Project, involves the upgrade of 1,000 kilometres (km) of electrical lines and the erection of over 17,000 wooden transmission poles across the named ECG districts to enhance electricity delivery in the beneficiary areas.

An estimated 600,000 residents, including businesses, in the six districts will benefit from the project, funded by the Millennium Challenge Corporation (MCC) of the United States of America, as part of the Ghana Power Compact Programme.

The LV Bifurcation Project is one of four sub-project activities that make up the ECG Financial and Operational Turnaround (EFOT) Project under the Power Compact Programme.

Ahead of handing over the project to the government, officials of MiDA yesterday toured some of the project sites.

It was established that construction activities in the Achimota, Dansoman, Kaneshie, Akuapem-Mampong and Kwabenya districts had been fully completed, while work in the Legon District was 85 per cent complete and scheduled to be fully completed in May this year.

The LV Bifurcation Project Manager at MiDA, Roland Osei Nyarko, told the Daily Graphic in the Legon District that the project, which was rolled out in three phases, was aimed at improving the quality of power supply by transferring load from existing overloaded electricity conductors and transformers to newly installed ones.

He said prior to the inception of the project, residents experienced low and fluctuating voltages, which manifested in dim lights and caused damage to electrical appliances.

He said eventually, the project was expected to contribute to improved incomes for the beneficiary residents, enhance job opportunities, improve the wellbeing of the people and contribute towards Ghana’s efforts at increasing economic growth and reducing poverty.

The project manager commended residents of the beneficiary communities for cooperating with the contractors, as power had to be taken off between 10 a.m. and 5 p.m. on days that the electrical lines had to be replaced.

The Construction Manager at Power Factor Limited, one of the contractors undertaking the project, Emmanuel Amissah, explained that undersize electricity lines on poles had been replaced with conductors, which could make it easy for power to flow, while more transmission transformers had been installed.

A hairdresser, Bernice Okerewaa, whose Bernice Beauty Salon is located at West Trassaco under the ECG Legon District in Accra, said she was now able to use all her electrical appliances, such as the dryer.

She said prior to the project, she could not power two of her dryers at the same time due to the low current situation, "and that made me lose some customers, but now both dryers can be on and off at the same time."

A block factory operator, Samuel K. Frimpong, said only one phase of his three-phase electricity metre was active before the installation of the new power transformers in his area.

He said he could not operate his block manufacturing machine as a result of the situation, "but now everything is okay and we are happy."