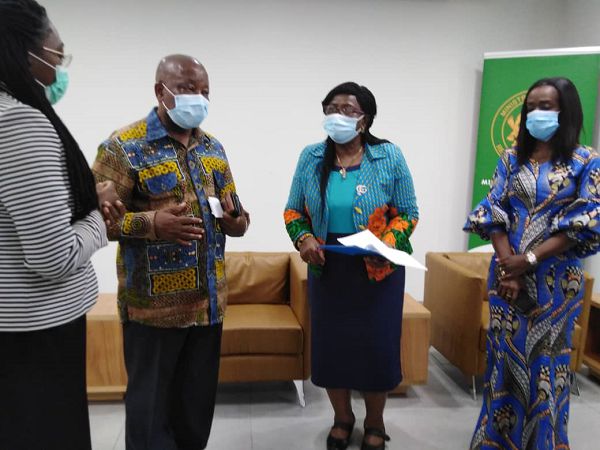 Mr Manu (2nd left) interacting with Dr Kimambo (left) and Mrs Darko (right) after the event. With them is Dr. Martha Gyansah-Lutterodt, (3rd left) Director, Technical Coordination, Ministry of Health after the presentation.

By the rating, the FDA has attained a level of maturity after meeting 267 WHO benchmarks backed by documentation as a stable, well-functioning and integrated regulatory system.

For attaining the WHO Level Three, Ghana becomes the second African country after Tanzania to achieve such a feat, making the Ghana FDA comparable to any regulatory body in the world.

Currently, only 51 countries including Ghana in the world have met the WHO minimum requirements to be considered to meet standards and promote equitable access to quality, safe, efficacious, and affordable medical and health products.

However Safety Monitoring one of the seven functional areas is already at Level 4 while two other areas, the laboratory and clinical trials area is expected to complete few documentation requirements attain the Level 4 within this year.

In a short statement to officially announce the FDA’s achievement of regulatory maturity Level 3, the Acting WHO Country Representative to Ghana, Dr Neema Rusibamayila Kimambo described the achievement as, “a milestone achievement, which is the result of investment by government of Ghana in strengthening of the regulatory systems.”

She noted that strong national regulatory systems were critically important to ensure that when people sought treatment, they received effective medication and were safe from harm.

“Ghana has strengthened its medicines regulatory system to ensure safety , quality, and effectiveness of medicinal products manufactured, imported or distributed within the country.

“WHO believes this achievement will further catalyse other countries in Africa to invest in regulatory systems strengthening to ensure availability and access to quality assured, safe, effective and affordable medical products to their populations. This should also serve to promote confidence, trust and further reliance on authorities attaining this level of maturity,” Dr Kimambo said.

For his part, the Minister of Health Mr Kwaku Agyeman Manu congratulated the FDA for the achievement , adding that they worked for it and therefore, deserved it.

He said the achievement called for celebration in order to ginger confidence in the regulatory system, adding that government was proud of the entire set up of the FDA.

“Now, we know we have a regulatory system in this country that is well functioning and integrated,” he said and thanked the WHO officials for the support it gave to the FDA to enable it attained such a feat.

In a statement, the Chief Executive Officer of the FDA,Mrs Delese Mimi Darko said the achievement was not a one affair and it would not be a one day result.

She said per the achievement, it would better equip the FDA to play its key role of promoting development of both local orthodox and traditional medicines industry by having oversight and supporting industry to produce quality medicines that can contribute to improving health and saving lives, being of the assured quality.

“We will keep working hard to continually improve our systems, products and services, not just as a country but within the Africa medicines harmonisation initiative to improve public health through support access to good quality safe and efficacious medicines.

“We are proud to be the second country in Africa to achieve this status and among 51 in the world,” Mrs Darko said.

She recalled that the formal process of attaining the WHO Level 3 started on March 25, 2019 “when a team of 18 assessors came to Ghana to the FDA to conduct five tough days of benchmarking. Several follow up meetings and one more visit and on April 15, 2020 we made it.

“We are proud to have achieved this status and we will want to thank government for the support and enabling environment and we look forward to playing our role towards the attainment of a Ghana Beyond Aid that is built in strong industries supervised by strong and world class regulatory authorities,” Mrs Darko said.

The Board Chairman of the FDA, Dr Sammy Ohene used the opportunity to appeal to the general public to have confidence in the FDA, adding that the agenda of the FDA was to keep Ghanaians safe and nothing else.