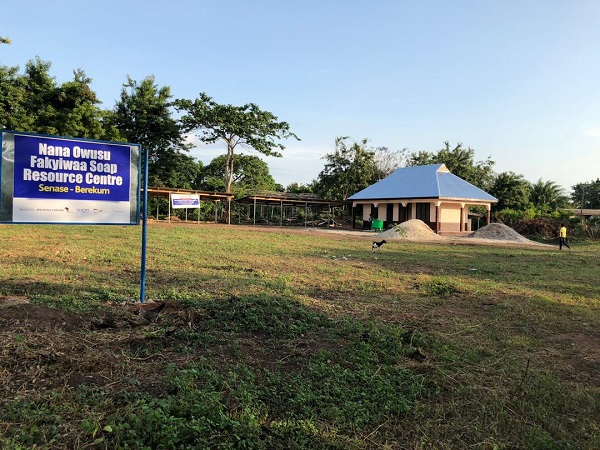 BOK African Concern, a Berekum based Non-Governmental Organisation (NGO) has officially handed over two community projects to the chiefs at Senase in the Berekum Municipality and Masu in the Dormaa Central Municipality of the Bono Region as part of efforts to generate employment for returnees and potential migrants in the two communities.

The Masu Community Block Factory projects at Masu in the Dormaa Central Municipality haS a storeroom, working area for manual and electric powered block-making machine valued at a total of GHS600,000.00.

The Soap Making Factory has a working room, main office, a storeroom and a washroom, a mechanised borehole and a standing pipe.

The amount also includes some start-up kits which were presented to a group of farmers, hairdressers, and physically challenged persons at the ceremony.

Speaking at a ceremony to officially commission the Nana Owusu Fakyiwaa Soap Factory Project, Mr Kofi Adjei, Berekum Municipal Chief Executive, commended the chiefs for making available an acre of land each for the two projects in Senase and Masu.

Mr Benson Savio Boateng, the Executive Director, BOK African Concern, said Ghana ranked second after Nigeria among the list of countries with the highest numbers of irregular migrants in Africa.

He added that in the Brong Ahafo Region the number of irregular migrants were more than half the population of the rest of the regions put together.

"As a result, the implementing partners, BOK, International Organisation for Migration(IOM) and GIZ had deeply thought this through how to change the narrative. They consulted with traditional rulers to explore avenues on how to address the challenge of unemployment among irregular migrants," he stated.

Mr Savio Boateng said the Senase community was chosen for the project due to the popularity it had gained in soap production, most residents were operating in that industry and had received vocational and technical training through the support of the Municipal Assembly and the Business Advisory Centre(BAC).

Nana Gyamfi, the Nifahene of Berekum Senase, thanked the implementing partners for building the facility and asked for additional support for the community which is the second biggest community in Berekum.