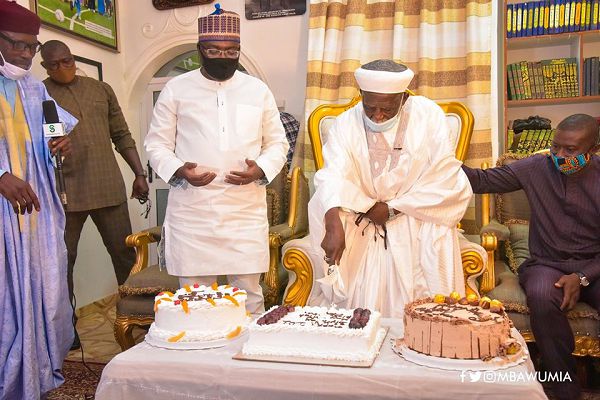 The National Chief Imam, Sheikh Osman Nuhu Sharubutu, has urged all Muslims in the country to use the month of Ramadan to pray to Allah to heal the world of the coronavirus pandemic (COVID-19) and also to ask for forgiveness.

According to him, the 30-day fast which started yesterday should be used as an avenue to seek Allah’s mercy, healing and forgiveness.

“We should seek Allah’s forgiveness because it is only Allah who can save us from any calamity. We must also sow the seed of unity, peace and prosperity during this month of Ramadan at a time when the world is in crisis and we need one another more than ever,” he said.

Sheikh Sharubutu gave the advice yesterday as he celebrated his 101st birthday.

The nation’s Muslim leader who is noted for his conciliatory approach and peaceful nature was on his special day showered with heart-warming congratulatory messages from many people, including leaders from the country’s political divide.

President Nana Addo Dankwa Akufo-Addo wished him everlasting blessings from the Almighty God saying, “may the Almighty continue to bless you with good health, wisdom, long life and prosperity.”

Vice-President Dr Mahamudu Bawumia who visited the National Chief Imam to celebrate the day with him, described him as a rare national asset.

“What he has done and continues to do for this country is invaluable. He is a major force of the peace and stability we are witnessing and enjoying in this country today.

His peaceful nature has promoted coexistence among the Muslim and Christian communities and other religions and this is really exemplary and remarkable,” he said.

Speaking to the Daily Graphic through his Personal Assistant, Alhaji Khuzaima Mohammed Osman, Sheik Sharubutu said it was his birthday wish and prayer that Ghana would continue to enjoy peace and unity.

In addition, he said it was his prayer that the Almighty Allah would protect the country from the scourge of COVID-19 and other forms of diseases.

“It is my prayer that we will come together as one people irrespective of our differences and background for the sake of Mother Ghana and promote peace and unity especially at this time when we all need to come together to fight the COVID-19 pandemic.

“Ghana is the only country we have and so we should not allow anything to destroy us,” he said.

Sheikh Sharubutu has been an epitome of peace and unity in the country, with his actions receiving widespread praise and commendation.

At his centenary birthday celebration last year, he attended Mass at Christ the King Catholic Church to mark the event.

The gesture was symbolic of his advocacy for religious tolerance, peace and unity.

Who is Sheikh Sharubutu?

Sheikh Osmanu Nuhu Sharubutu was born at Cow Lane in Accra in April 1919. His parents were from a well-cultured and knowledgeable House.

His father, Sheikh Imam Nuhu Sharubutu was the Imam-Raatib (regular or residential Imam) of the Accra Central Mosque from the late 1960s to 1982 when he passed away.

His mother was a sister to the Greater Accra Regional Imam, Sheikh Imam Muhammed Abbas, popularly known as Mallam Muhammad Mazawaje, who also rose to the position of National Imam (from late 1933 to 1960).

Young Osmanu started his education at home at the feet of his father during the day and with his mother at night.

In 1974, after lengthy discussions among the traditional and tribal chiefs, academics, Islamic scholars and religious personalities, a consensus was reached for Sheikh Osmanu to be appointed as the Deputy Regional Chief Imam of Accra, deputising for his cousin, Sheikh Imam Muhammed Mukhtar Abbas, who had succeeded his father.

The appointment of Sheikh Osmanu as Deputy Greater Accra Region Chief Imam was done with regard to his unique qualities, intellectual capacity, dedication to teaching and passion for Islam and fine character. He initially turned down the offer, but it was forced on him by prominent Muslim chiefs who said it could be a divine call to serve God.