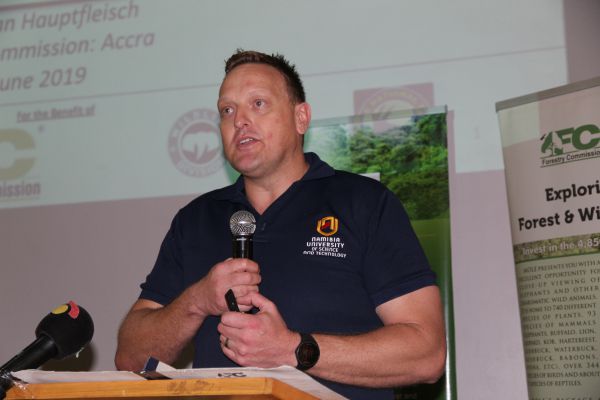 Dr Morgan Hauptfleisch (inset) of the Department of Agriculture and Natural Resources, Nambia University of Science and Technology, making a presentation at the launch of the report on the census. Picture: ESTHER ADJEI
30.5k Shares

A wildlife census conducted at the Mole National Park has revealed that the park has a healthy and growing wildlife population capable of putting the country on the global map of great wildlife tourist destinations.

The census looked at the population of animals such as elephants, buffalos, bush bucks, warthogs, kobs, water bucks, hartebeests and baboons which are found in the park.

With a confidence level of 95 per cent, the averages of the multiple approach census estimated that the elephant population was about 436, while buffalos were about 1,392.

The census was conducted from January to April this year by the Forestry Commission’s Wildlife Division, in partnership with a Namibian consortium comprising Bushskies Photography and the Namibian University of Science and Technology, with funding from the European Union (EU).

In 2000, the Forestry Commission took an ambitious step to get the Mole National Park enlisted as one of UNESCO’s Global Heritage sites.

However, in 2015, the International Union for the Conservation of Nature (IUCN) evaluation team declined to recommend it because the management plan of the  park was outdated.

The team found that the wildlife population of the park had not been updated since 2006.

It was on the back of that development that the Forestry Commission and the other partners conducted the census to update data on the wildlife population at the park.

The UNESCO World Heritage status is an international recognition that is given to tourist sites that have better management practices that are in accordance with global standards.

The objective of the census was to obtain accurate estimates of wildlife numbers in the Mole National Park and train staff of the park to conduct ongoing systematic wildlife monitoring and analysing trends.

Its overall aim was to strengthen Ghana's bid to make the Mole National Park attain the UNESCO World Heritage status.

The census was conducted using an integrated approach that comprised aerial surveys, foot transacts, camera trapping and drawing on local knowledge about the park.

As part of the process, 77 staff of the Mole National Park received capacity building in the use of modern technology for wildlife management, geographic information systems (GIS) and conducting wildlife census.

The Chief Executive Officer (CEO) of the Forestry Commission, Mr Kwadwo Owusu Afriyie, said at the launch of the report in Accra yesterday that the result of the census was a major milestone in the quest to give the Mole National Park a World Heritage status.

"It will help us revise and update the outdated management park plan and also, we will now have the needed information to strengthen our recommendation of the Mole National Park as a globally significant ecosystem, with ecological features of Outstanding Universal Value (OUV) that will satisfy the UNESCO World Heritage site criteria," he said.

He said the partnership between the Forestry Commission and the EU yielded a lot of fruits, including the Protected Areas Development Project (PADP), the World Development Support Project (WDSP) and the ongoing Voluntary Partnership Agreement (VPA) to support forest law enforcement.

Mr Afriyie said the Forestry Commission had prioritised partnerships with private investors to improve the Mole National Park because of its potential. 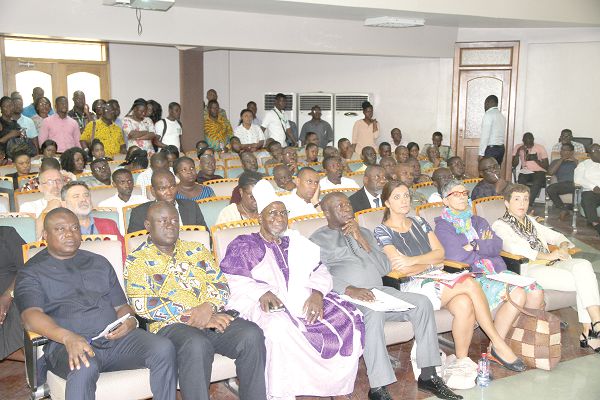 The EU Ambassador, Ms Diana Acconcia, underscored the need for Ghana to be more committed to preserving its wildlife and forest resources.

She said investment in the Mole National Park and environmental conservation was key to creating jobs and boosting the tourism and the hospitality industry.

"The EU supports the Ghana beyond Aid agenda by the government, but we believe that preservation of the environment, wildlife and natural resources will play a key role in achieving that agenda," she added.

Ms Acconcia stressed that the EU would continue to mainstream climate change issues into initiatives aimed at protecting the environment.

She added that the EU was committed to deepening cooperation with Ghana, using trade, development initiatives and diplomacy.