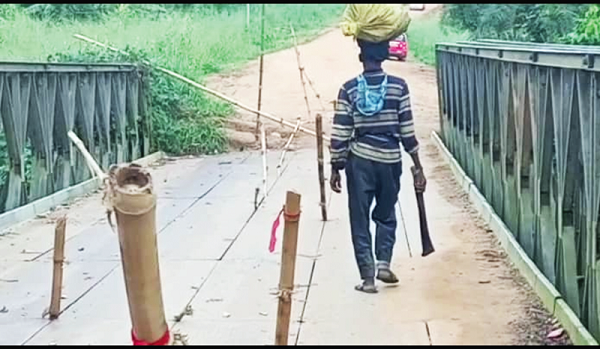 Residents in and around Mante in the Asikuma-Odoben- Brakwa District of the Central Region have called on government to repair the dilapidated steel bridge that links the Mante community, a cocoa farming community, to the surrounding communities.

The residents indicated that loads of foodstuff and cash crops still remained on farms waiting to be carted because the farms were now inaccessible.

The bridge is in a dilapidated condition making it dangerous for vehicles to cross.

There are openings in the slabs on the bridge, compelling residents to put in sticks with red bands to alert users about the dangerous state of the bridge.

The structure itself has cracks and openings which make crossing it a risky adventure.

As a result of the weak bridge, commuters have to get off vehicles and walk across to the other side of the bridge to join another vehicle.

Residents, mostly farmers, who use the route to and from their farms and also to marketing centres with goods, including cocoa and foodstuff, have to unload all goods at one end of the bridge.

The goods are then carried by individuals across the bridge before loading them onto another waiting vehicle at the other end of the bridge.

A resident, Mr Kobina Bennin, said life had become frustrating for residents since the bridge in the Asikuma-Odoben-Brakwa District in the Central Region collapsed and had affected the economic activities of the residents and drivers plying the road.

Others said the cost of transportation had significantly increased due to the state of the bridge.
Some drivers and other vehicle users who patronise the collapsed bridge called on the authorities to fix it urgently because foodstuffs were getting rotten on farms.

The Member of Parliament for the Asikuma-Odoben- Brakwa, Alhaji Alhassan Kobina Quansah, in an interview mentioned that communities in the district had been affected.

"It has been terrible for the people of the area. They are predominantly farmers who have to move their goods from the farms to the market and they are going through hell with the current situation," he stated.

He said he had made arrangements for the director of bridges to inspect the bridge and the road which was currently under construction and assess the work for probable action.