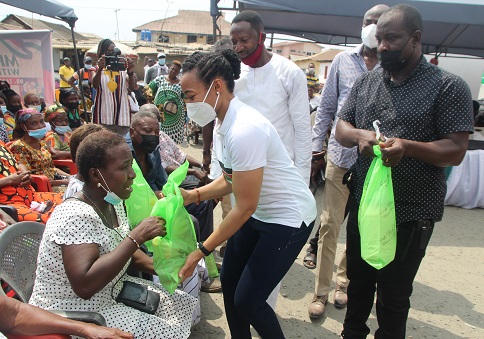 The Member of Parliament (MP) for Korle Klottey Constituency, Dr. Zanetor Agyeman-Rawlings has distributed food items to over 500 aged constituents during an event on Friday, January 14.

Dubbed "MP’s time with the aged", the move was part efforts by the MP’s effort to interact and celebrate the New Year with the aged.

The event saw Dr. Agyeman-Rawlings and the aged dancing to tunes from the past and to some National Democratic Congress (NDC) campaign songs.

Dr. Agyeman-Rawlings was supported by a team of NDC National Executives to interact and spend some time with the aged.

Addressing the elderly at the event, Dr. Agyeman-Rawlings described them as the pillar of the society and called on all to accord them the respect and to support them when the need arise.

“I am very appreciative of how I have been received, since I have lost my father you are now my extra parents,' she said. When I started with my campaign, I received an advise from my father that everything I do, I must remember the elderly, and since that time whenever I go on tour I prioritise the aged,” she said.

She noted that Ghana has no right to stand as a society if the needed reverence is not given to the elderly.

“In any society if we can’t give respect to the elderly then we have no right to stand as a society. When you read the Ten Commandments, one of them says honour your parents with a condition attached, so we know the importance of honouring you,” she noted.

She explained that although the items distributed to the aged was not enough to solve all their problems, their gesture was to show that they care about the aged.

“We are here to ease the burden you are going through, especially after the festive season; we know it has been difficult, and what we are presenting will not solve all your problems but it is a gesture to show that we are thinking about you. I wish I could do more because you are the pillar of the society,” she noted.

She, however, urged the elderly to teach younger people Ghana’s history so they can appreciate where the country is coming from.

“This will prevent young people from being lured with money to cause chaos in the communities. It is not by chance that we have peace and stability in the country, we must not joke about it because other countries in the West African Sub-region are going through a lot because they do not have peace,” she said.

Madam Charlotte Okai, one of the aged who spoke on behalf of the beneficiaries, thanked the Dr. Agyeman-Rawlings and the NDC officials for the gesture, adding that they appreciate the love and care shown towards them.

She expressed their commitment to support the MP and rally behind her to improve development within the constituency.

“We thank you for remembering us, and spending time with us, we appreciate it and we will continue to support you in your effort to develop the constituency,” she said.