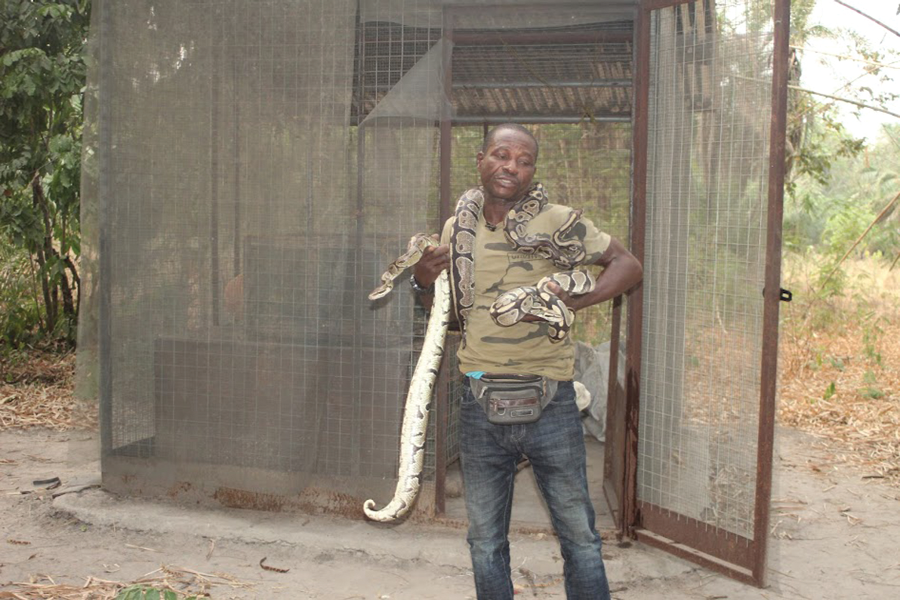 As the Daily Graphic team took to their heels immediately the cages to his 22 snakes made up of different species were opened, he yelled: “Where are you running to? Come back, they are harmless.”

It was around 5:00p.m. on February 27 when the team arrived at the snake village located at Liati Soba in the Afadjato South District in the Volta Region for a story for the newspaper.

The quiet and serene environment surrounded by tall trees was an uncomfortable juxtaposition to our knowledge that the same environment harboured some of the deadliest snake species in the world.

The 61-year-old manager of the village, Gado Safie Zimmaziwo, announced to our team: “I just lost my biggest cobra.” At first, we thought he meant the cobra had died, so there was an outpouring of words of sympathy from us for his loss.

He quickly explained, however, that he meant the snake had escaped into the bush. I immediately began to panic, suddenly taking quick glances around, in case; the cobra had suddenly had a change of heart and was making its way back.

It didn’t help matters, when Mr Zimmaziwo pulled out two huge African pythons from the cages, wrapped them around his neck and called for pictures to be taken.

At that moment, it was evident our two photographers wanted to change their career to become sprinters of Liati Soba by making a dash for the bushes.

With the other team members at a safe distance, the two - David Able and Gabriel Ahiabor - had a tough time deciding on which of them should take the shots, while the cage was still opened, as they frantically urged each other to get the job done.
Obviously the two were not ready to take the risk for fear of being bitten by the slithering creatures.

Mr Zimmaziwo, who the team later nicknamed ‘Liati Soba Diabolo man’ had a tough time persuading them to step closer for pictures, after explaining that the snakes were friendlier than humans.

The snake man’s aim of winning the team’s heart towards the snakes was surprisingly achieved, as the individuals who initially thought of running for dear life started touching, playing and even taking ‘selfies’ with the creatures.

The snake manager, whose aim among others for establishing the place was to break the myth of enmity between snakes and humans, explained that snakes were not dangerous contrary to popular belief and that “if you treat them well, they won’t harm you but if you don’t they can harm you.”

The snake sanctuary has now become a popular place, where people including schoolchildren, normally visit during holidays or foreigners go to learn more about snakes.

To improve the ecotourism of the area, Mr Zimmaziwo appealed to investors to help him build better cages for the snakes for better public viewing and also a rest place for visitors.

That, he said, would not only open up the area, but also attract foreigners and bring in more foreign exchange.

Undoubtedly the Afadjato South District plays host to a number of tourist attractions, including Mount Afadja, Wli waterfalls, the Tagbo falls, and the Tafi Atome Monkey Sanctuary, but
these sites have not been well developed to reap their full benefits.

The Afadjato South District Chief Executive, James Flolu, however, said his assembly was leaving no stone unturned to develop the tourist attraction sites into viable places for tourists and citizens.

Interestingly, while many value the snake village which is home to species such as the African ball python, black, yellow and white mambas, vipers and cobras for its tourism role, this place of interest is a potential hub for health-related research into developing anti-snake venoms as is done in India if properly developed.

An anti-venom is made by collecting venom from the relevant animal and injecting small amounts of it into a domestic animal. The antibodies that form are then collected from the domestic animal’s blood and purified.

Versions are then made available for stings and bites from spiders, snakes, scorpions, among others.

A key issue facing the country’s healthcare sector is the poor management of snake bites, largely due to inadequate and affordable medications and a lack of adequate capacity in dealing with these cases.

The situation in recent times has been exacerbated by reports of shortages of anti-snake venoms in Ghana.

The situation is of huge concern due to rampant snake bites, especially in rural communities during farming seasons.

Medicines available are also reported to be ineffective for treating the cases that come up due to snake anti-venom mismatch; hence victims of venomous snake bites are left to their fate.

For this reason, health experts have called on Ghana to carry out its own research into anti-venoms related to the indigenous snake species in Ghana.
They believe that the establishment of snake farms in the country will facilitate research into suitable serum for snakebites in Ghana, as this would help address the high rate of snakebite incidents in the country.

The snake village has the potential to become one of Ghana’s biggest snake farms and probably double as a research centre, where the suitable serums could be obtained for the production of highly effective medicines when given the needed support.