Law to reduce backlog of criminal cases in offing 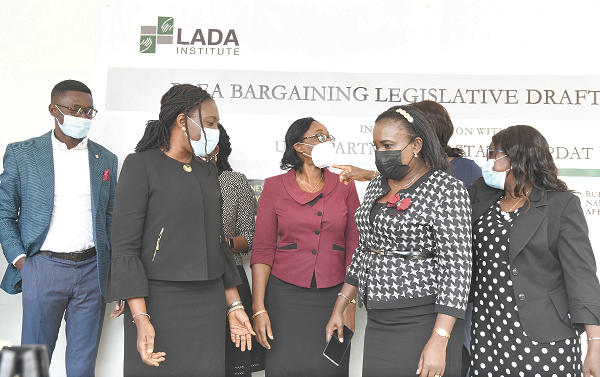 Mrs Yvonne Atakora Obuobisa (2nd left), Director of Public Prosecutions at the AG’s Department, interacting with some the participants in the validation workshop on the Draft Plea Bargaining Bill. Among them is Justice Afia Serwah Asare-Botwe (2nd right), Justice of the High Court. Picture: EBOW HANSON

The country’s criminal justice system is set for a massive overhaul, with a law on plea bargaining in the offing.

A draft plea bargaining bill has been developed by the Attorney-General’s (A-G’s) Department and is currently being validated by experts for necessary inputs before it is forwarded to the Cabinet for consideration and eventually laid before Parliament to be passed into law.

When passed, the plea bargaining law will be expected to reduce the backlog of criminal cases in court by allowing accused persons to admit their guilt and enter into some form of arrangement with the prosecution, without necessarily standing trial.

Plea bargaining generally is where accused persons make some concessions, either by admitting their guilt or assisting in the investigation and prosecution of others, in exchange for the dropping of charges against them or receiving reduced sentences.

The draft plea bargaining bill is expected to be an amendment to the Criminal and other Offences (Procedure) Act, 1960 (Act 30).

Other aspects are the benefits of plea bargaining for an accused person, what the agreement should entail and the option for either party (the prosecution and the accused) to withdraw from plea negotiations.

It also gives the court the power to either accept or reject a plea bargaining.

Another critical aspect of the draft bill is that plea bargaining shall apply to all offences, except treason and high treason.

At a validation workshop in Accra yesterday, the participants highlighted the advantages of plea bargaining to the criminal justice system, but cautioned that care must be taken in order not to make it susceptible to abuse.
Organised by the Law and Development Institute (LADA) , with support from the US State Department, the workshop brought together prosecutors from the AG’s Department, lawyers from the Legislative Drafting Division of the AG’s Department, judges and other stakeholders in the criminal justice system.

The DPP, who represented the AG at the workshop, noted that a plea bargaining law would reduce congestion within the criminal justice system.

The Managing Director of the LADA Institute, Mr Mark Ofori-Amanfo, said the validation workshop was to ensure that all the loopholes and weaknesses in the draft bill would be corrected before it was submitted to the Cabinet.

He said plea bargaining allowed criminal matters to be settled quickly to reduce the workload on the actors in the criminal justice system, including judges and prosecutors.

“There is also work ongoing with community sentencing and other reforms. The ultimate aim is to bring efficiency into the criminal justice system,” he said.

One of the ideas that came up during the validation workshop was the need to insulate the law against abuse.

The participants agreed that the supervisory regime ought to be strengthened in order not to make some state actors collude with accused persons to abuse the plea bargaining law.

Others also took issue with the bill exempting only treason and high treason.

They said some serious offences, such as murder, kidnapping and narcotics, could also be part of plea bargaining.