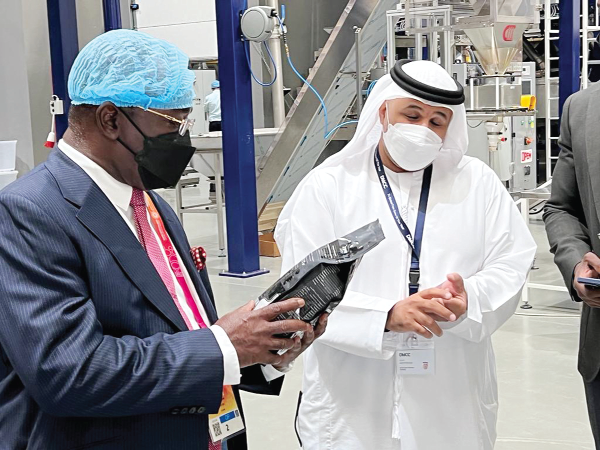 Ghana is turning to an internationally certified agro-processing facility in Dubai to add value to its cocoa and coffee and export them to the global market without hindrance.

This will ensure that the country obtains more value from both commodities, about 10 times more than what it currently earns.

Ghana can rake in over $10 billion, compared to the current $2.5 billion it earns from its raw commodity export.

The Dubai Agric Commodities of the United Arab Emirates (UAE) has a United States (USA) Food and Drugs Authority (FDA) certification which enables products from its processing facilities to enter the US and European markets without hindrance.

It is a state institution that adds value to the raw commodities to the exporting country’s specifications and finds markets for the finished products globally.

Currently, Ghana's chocolate products do not have the USA FDA certification, making cocoa products from the country difficult to enter the US and European markets, except the raw commodity, which commands very low prices, compared to finished products.

The Agric Commodities route is, therefore, a strategy to access the global market without hindrances.

The Ministry of Food and Agriculture (MoFA) has begun discussions with the institution, culminating in the sector Minister’s recent visit to the facility in Dubai.

If the move gets the green light, Ghana's cocoa products, such as semi-finished cocoa products and finished chocolate and others, are to be fully processed in Dubai and packaged for the world market.

Currently, even though Cote d’Ivoire and Ghana produce about 60 per cent of the world’s cocoa, a market worth over $130 billion, the two countries together get only $6 billion, with Ghana's share being $2.5 billion annually.

This is because Ghana’s cocoa enters the international market in the raw state, without any value addition, and that does not attract much value.

The Minister of Food and Agriculture, Dr Owusu Afriyie Akoto, toured the Agric Commodities during his recent visit to the ongoing Dubai Expo 2020 to get first-hand information on the institution.

Reciprocally, the Director of the institution, Saeed Al Suwaidi, last week called on the minister to firm up discussions with the ministry on the way
forward.

While in Ghana, Mr Suwaidi held discussions with the ministry and the Ghana Cocoa Board (COCOBOD) and toured the Cocoa Processing Company (CPC), as well as the Cocoa Research Institute at Tafo in the Eastern Region.

He also took along samples of Ghana’s coffee and cocoa for testing to find out if the products met the standards of the institution.

In an exclusive interview with the Daily Graphic, Dr Akoto explained that there would be a government-to-government agreement, in which a framework would be established for COCOBOD to collaborate with the institution and for the Cocoa Marketing Company (CMC) to send cocoa beans there for processing.

Additionally, he said, CPC would also channel its fully and semi-processed products into the institution.

“We are on the brink of a major breakthrough in the traditional way that we sell our cocoa and other commodities,” Dr Akoto stated.

Describing what Ghana currently received from the world market as a pittance, the minister explained that the set-up in Dubai would "make sure that that stranglehold is released”.

"What I saw in Dubai is a facility which goes from A to Z on the value chain," he explained.

The minister added that the Agric Commodities was a perfect ground for going around all those years of shackles, whereby a few selected companies had a stranglehold on the economies of developing countries.

Dr Akoto expressed the belief that if the discussions went through, it would be a windfall for Ghana's cocoa and coffee, emphasising that it would be a breakthrough for the country.

Mr Suwaidi told the Daily Graphic that he was in Ghana at Dr Akoto’s invitation to look at the possibility of adding cocoa to the range of products passing through his facility.

He said currently, his institution handled tea and coffee and was keen on adding cocoa, saying: "We are looking at opening a centre for cocoa in Dubai, using the same winning formula that we use for coffee and tea.”

He added that the company wanted to build a super centre for cocoa in Dubai, and that as far as it was concerned, Ghana represented cocoa and, therefore, “Ghana's cocoa has to be in the equation”.

Mr Suwaidi explained, for instance, that even though the UAE was a nonproducer of tea, "currently, we produce 500 million tea bags annually".

For coffee, he said, there were about 25 countries around the world routing their coffee through his institution for the global markets.

“We don't actually own anything inside our facility; what we do is help people own and use our facility with their ownership of the product; meaning that they use our facilities for storage or processing and repackaging,” Mr Suwaidi stated.