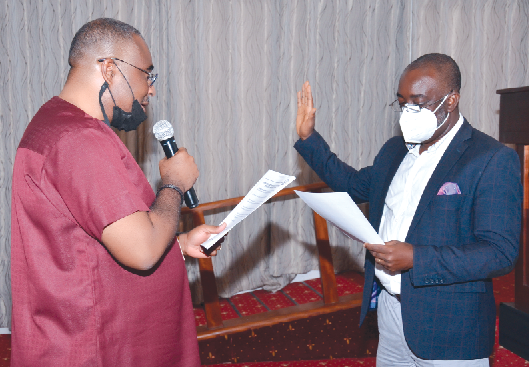 The Ghana Consulting Engineers Association (GCEA) has elected Mr. Magnus Lincoln Quarshie as the fifth President of the association at its 2021 Annual General Meeting.

He takes over the leadership mantle of the GCEA from Mr. Albert Viala des Bordes, who has completed his term of office.

Mr. Quarshie was led to swear the oath of office and pledged to lead the next council to continue the work of the past council in the areas of developing local content policies for national discourse and creating visibility for the GCEA.

He comes to the position with a wealth of experience, having been President of the Ghana Institution of Engineering (GhIE) in 2014/15.

He was also the President of the West African Federation of Engineering Organisations from 2015-2017, and holds a BSc degree in Civil Engineering from the Kwame Nkrumah University of Science and Technology (KNUST), an MSc in Transportation and Road Engineering from TU/IHE Delft, The Netherlands, and an MBA in Leadership and Sustainability from the University of Cumbria, UK.

He is currently the CEO of Delin Consult, a civil engineering and management consulting firm and a fellow of the GhIE.

The association was incorporated on February 21, 1973 with the objective and purpose, among other things, to formulate policies and guidelines for the practice of professional engineering service locally and internationally.

In his acceptance speech, Mr. Quarshie eulogised the founding fathers of GCEA, saying their toil had brought the association this far.

Mr. Quarshie said Africa, and for that matter Ghana, was the best place engineers should be at this time in terms of infrastructure development.

The GhIE 2016 infrastructure report card, which focused on water, energy and the transportation sectors, revealed that Ghana’s Infrastructure level was graded D.

"Evidently, it is a case of building to fit purpose; needless to say, building infrastructure that last forever,” he added.

He, consequently, called on the government and other stakeholders to involve local consulting engineering as lead firms in infrastructural projects to promote joint ventures in the design and building of this infrastructure development, stressing the need also for a local content policy and Act.

“There appears to be so much going on. However, many of our local firms are either not involved; and in some cases, they are like third party participants.

"As a country with a huge deficit of infrastructure, the engineering firms are key and cannot be bystanders or relegated to the background,” he explained.

Mr. Quarshie added that the consulting industry, like in other organised countries, was a key driver for industry and academia relationship where many students went through internship and mentorship.

He said that would not happen with the trend where local consulting businesses did not thrive.