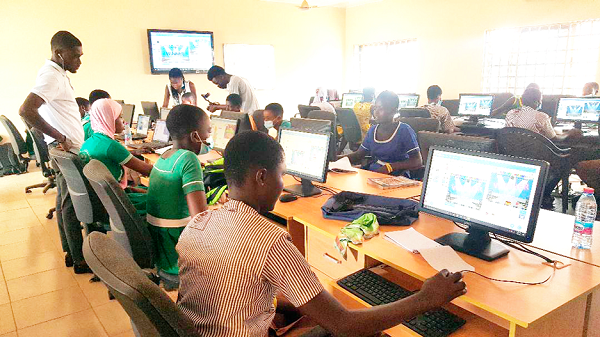 This year International Day of the Girl Child (IDGC) is on the theme, "Digital generation. Our generation”.

The day is celebrated on October 11 every year.

In Ghana the Department of Children, under the Ministry of Gender, Children and Social Protection, is celebrating the day on the national theme, “Digital generation: Promoting citizenship for girls without discrimination”.

According to the acting Director, Department of Children, Mrs Florence Ayisi Quartey, Ghana was marking the day with a symposium to explore digital opportunities that exist for girls in the digital generation.

The symposium, she said, would involve two panel discussions on cyber security and career opportunities for girls in a digital generation, with special focus on how it should drive policies, programmes and provide opportunities, and also a “Girls Talkshop” on the theme and their experiences in the digital environment and their future aspirations.

It is estimated that in the world’s least developed countries, the gender gap for internet users hovers around 43 per cent.

This year’s celebration, she added, was driven by both the commemoration of the Generation Equality Forum (GEF), which launched a five-year commitment from civil society leaders, governments, corporations and change makers for bold gender equality impacts, as well as two years of COVID-19 pandemic that has accelerated digital platforms for learning, earning and connecting, highlighting girls’ diverse digital realities.

The GEF is an international initiative in favour of gender equality, organised by the UN Women, a global champion for gender equality and co-chaired by the governments of France and Mexico, in partnership with civil society.

The forum responds to the fact that despite the commitments made in Beijing in 1995 to take strategic, bold action on gender equality, progress and implementation have been slow as no single country today can claim to have achieved gender equality.

It has been 26 years after the last World Conference on Women in Beijing; the GEF, therefore, aims to fuel a powerful and enduring coalition for gender equality, bringing together governments, activists, corporations, feminist organisations, youth and allies to achieve transformative change.

The IDGC celebration, she said, would bring attention to the power and diversity of girls as digital change-makers and designers of learning and other solutions that address the challenges and opportunities girls faced in the digital world.

She said it would also bring attention to the need for everyone to recognise gender equality and actively portray it through intentional approaches towards closing the gender digital divide which would help open up pathways for all girls and for generations to live their full potential.

Mrs Quartey added that the celebration, which would be carried out at both regional and national levels, would include a press release on the activities, a GEF and tech trailblazers symposium where ideas would be shared of stories, blogs, videos of inspiring adolescent girls who were tech trailblazers and how their actions were empowering GEF, as well as collectively amplifying the fight against the gender digital divide and expanding pathways for every girl, everywhere.

She said there would also be a girls’ digital camp, which would bring girls from deprived communities across the country to be given exposure on internet use and the opportunities the platform offers in education, business, communication and health, among others.

According to her, another group of girls who would be drawn from more endowed communities across the country would be engaged alongside in a coding and cyber security training to enhance their digital knowledge.

Children, she said, would also be organised in different parts of the country to share space with different digital/internet- based organisations to expose them to the career opportunities that existed in the environment.

The Department of Children, she said, would also organise a sensitisation programme for girls on cyber security and digital opportunities in schools across the country, as well as radio and television discussions on different facets of the digital environment and their relationship with girls’ development and the future success.

In a statement to mark the day, the UN Women said, “Girls are leaders. Girls are change-makers. Girls are driving good and growth around the world. They are a fundamental source of transformational change for gender equality, and technology is a crucial tool to support their work, activism and leadership.”

The organisation is, therefore, joining other United Nations (UN) agencies, civil society, and girls around the world to celebrate the day, saying, “Together, we’re calling for equal access to the internet and digital devices for girls and targeted investments to facilitate opportunities for girls to safely and meaningfully access, use, lead and design technology”.

It added that digital inclusion and literacy opened new avenues to learning, earning and leading for girls, especially during the COVID-19 pandemic, but the pandemic had also deepened the gender divide around connectivity and online safety, with girls facing economic and social barriers to internet and device access.